Harlowton is a city and is the county seat of Wheatland County, Montana, United States. The population was 997 at the 2010 census. The city was once the eastern terminus of electric operations (1914–74) of the Milwaukee Road railroad's "Pacific Extension" route, which went all the way to Avery, Idaho. Here, steam or diesel locomotives were changed or hooked up to electric locomotives. Harlowton was founded in 1900 as a station stop on the Montana Railroad, a predecessor to the Milwaukee, and was named for Richard A. Harlow, the Montana Railroad's president.

Harlowton is surrounded by the Crazy, Little Belt and Big Snowy Mountains, which are a part of the Lewis and Clark National Forest. The National Forest offers plenty of acreage for recreational activities; camping, sight-seeing, hunting, OHV riding, snowmobiling, etc. Fishing access sites are located along the Musselshell River or at nearby Deadman’s Basin or Martinsdale Reservoir. There are three parks located within Harlowton: Chief Joseph Park, Deer Park, and Fischer Park. The old Milwaukee Railroad track bed has been converted into the “Smoking Boomer” trail. Of special interest are the pioneer bronze sculpture, entitled 'And They Called the Land Montana' and the Veteran’s Honor Wall located in front of the Wheatland County Court House. 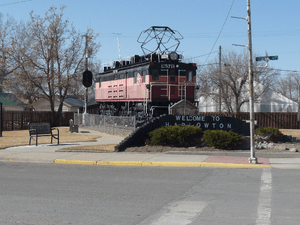 The Upper Musselshell River Valley is named for the Musselshell River which got its name from the large number of fresh water mussels found in its river bed. In the fall and winter weather, the bison would migrate to the lower altitudes along the Musselshell River. Early plains hunters, taking advantage of the large bison population, frequented this area. Some of the tribes that traveled through the area were the Crow, Blackfeet, Flathead, Gros Ventre, Northern Cheyenne, Nez Perce, Shoshones, Sioux, and Assiniboine.

Harlowton lies within the Montana High Plains that form a part of the Northwestern Plains. The area is most known archeologically for the line of demarcation which was mutually established between the Crow and Blackfeet tribes that passed through the area. This fifty mile rock line fence crossed east to west from the Big Snowy Mountains to the Crazy Mountains. The rock line hunting boundary was the cause of several battles in the area.

On May 7, 1868, a treaty with the Crow Nation and the United States Government opened the Musselshell River Valley to settlement.

The first sheep operation on the Upper Musselshell was started by P.J. Moore in 1878. The first large cattle operation in the area was the Chicago Montana Livestock Company in 1882 with S.S. Hobson as part owner and manager.

In 1878, JV Salazar (Mexican John) was robbed of his horses, grub, and guns near the present site of Harlowton by the noted horse thief George Parrott (Big Nose George). At the time of the Salazar robbery, George Parrott was known to be camping on the Musselshell River with Andrew Garcia where he was holding a bunch of stolen horses on his way to Canada. Big Nose George was later hung at Rawlins, Wyoming.

The name Merino was changed to Harlowton on November 9, 1900. The first building to be erected in the new town site was a barber shop, owned by Thomas Hanzlik.

On June 17, 1907, a fire destroyed 24 buildings on the north side of Harlowton’s Main Street. The town was rebuilt, though most of the construction took place on Central Avenue to correspond with the Milwaukee Railroad plot.

Wheatland County was the first county in the US to go over its’ goal in the World War I Liberty Bond drive of 1918. For this effort, a ship, the USS Wheatland (AKA-85), was named after the county.

The 163rd Infantry Regiment is a regiment of the Montana National Guard based in Harlowton. It went overseas with the 41st Infantry Division in World War II.

Agriculture has remained a staple for the local economy. The main products are Wheat, Barley, Oats, Hay, Cattle, Sheep, and Honey.[1] There are many businesses supporting the agriculture industry in Harlowton; the Wheatland County Farm Service Agency, Veterinary Clinics, a Feed Store, Ranch Supply Store, Auto and Mechanical Shops, Hardware Stores, and a Saddle Repair Shop.

Harlowton and Wheatland County boast an industrial business segment with some truly unique products from stone to steel griddles, honey for your local pancakes to event tickets. The wide variety of products span the globe. E S Stone & Structure Incorporated and Montana Rock and Stone LLP have multiple stone quarries around the area from which an extensive line of rock and stone products are produced. Rocky Mountain Cookware manufactures die stamped steel griddles and broilers, it was established in 1992. Steve Park Apiaries provides pollination and offers a variety of beeswax and honey products. Cream of the West whole grain hot cereal was established in 1914 and its production facility was moved to Harlowton in 2002. TicketPrinting.com is an internet based ticket printing company that provides online services and printed products for event hosts. The main printing facility was opened on September 11, 2001 in Harlowton. TicketPrinting.com is the largest private employer in Wheatland County.

The Judith Gap Wind Farm is located north of Harlowton along US Highway 191. There are 90 wind turbines situated on 8000 acres of land that produce 135 Megawatts of power. The Judith Gap Wind farm was established in 2011 and is owned by Invenergy LLC. The power produced by this facility enters the Northwest Energy grid and is distributed where needed. Other wind farms located near Harlowton are the Musselshell Wind Project by Shawmut, the Two Dot Wind Farm by Two Dot, and Gordon Butte Wind LLC by Martinsdale.

The financial institutions are the Citizens Bank and Trust Company and the Tricounty Federal Credit Union. Offering insurance needs are the Farm Bureau Insurance Company and Mid-Montana Insurance Company. Harlowton has two motels; the Corral Motel and Country Side Inn. There are clothing stores, thrift stores, boutiques, restaurants and saloons.

School District 16 includes the Hillcrest Elementary (K-6) and Harlowton High School (7-12). The mascot is the Harlowton Engineer and school colors are maroon and gold.

The Jawbone Creek Country Club is listed in the Guinness Book of World Records for being the only golf course with a cemetery in it. The nine-hole course has a front and back nine by tee placement and offers clubhouse facilities, a driving range, and practice green.

The Barnsion is a first class vacation rental, wedding venue, and event center located on the Miller Ranch in Harlowton.

The town of Harlowton is located in the Fort Union Geological formation and is famous for its Paleocene fossils. In 1902 Albert Silberling, a local homesteader and self-taught paleontologist, discovered the Douglass Quarry southwest of Harlowton. Albert Silberling and Earl Douglass, a Princeton University paleontologist, discovered fossil remains of primitive mammals including the Ptilodus, Phenacodus, and Plesiadapis in the quarries southwest of Harlowton. Albert Silberling’s discoveries from fossils excavated in the Harlowton area have subsidized the information about life in the Paleozoic Era.

The Rugocaudia cooneyi and the Tatankacephalus cooneyrum are two new dinosaur species that were found southwest of Harlowton. The Rugocaudia cooneyi is a new sauropod dinosaur that was described and named by the paleontologist Cary Woodruff in 2012. The genus name Rugocaudia means “wrinkle tail” and the species name of cooneyi honors the landowner J. P. Cooney. The Tatankacephalus cooneyrum is a new Ankylosaur dinosaur species found in 1997 by Bill and Kris Parsons, Research associates of the Buffalo Museum of Science.

The Avaceratops lamersi dinosaur was found on the Lammers family Careless Creek Ranch northeast of Harlowton and is the first of its kind. The Aveceratops is a small horned dinosaur that belongs to the Ceratopsidaie family. Eddie and Ava Cole discovered the fossil remains in 1981. Dr. Peter Dodson, Professor of Paleontology and Veterinary Anatomy at the University of Pennsylvania, participated in further excavation and transported the specimen to the Academy of Natural Sciences of Philadelphia. A cast of the Avaceratops lammersi is on display at the Upper Musselshell Museum in Harlowton.

The town is located on the slopes of the Crazy Mountains. Other surrounding mountain ranges include the Big Snowy Mountains, Little Belt Mountains, Bull Mountains, and the Castle Mountains.

According to the United States Census Bureau, the city has a total area of 0.58 square miles (1.50 km2), all land.

There were 478 households of which 21.3% had children under the age of 18 living with them, 43.7% were married couples living together, 8.2% had a female householder with no husband present, 4.0% had a male householder with no wife present, and 44.1% were non-families. 40.2% of all households were made up of individuals and 19.9% had someone living alone who was 65 years of age or older. The average household size was 2.03 and the average family size was 2.71.

There were 496 households of which 21.0% had children under the age of 18 living with them, 46.6% were married couples living together, 6.7% had a female householder with no husband present, and 43.3% were non-families. 41.3% of all households were made up of individuals and 21.8% had someone living alone who was 65 years of age or older. The average household size was 2.07 and the average family size was 2.79.

All content from Kiddle encyclopedia articles (including the article images and facts) can be freely used under Attribution-ShareAlike license, unless stated otherwise. Cite this article:
Harlowton, Montana Facts for Kids. Kiddle Encyclopedia.