Hassocks is a large village in West Sussex, England.

It can be found about 7 miles (11.3 km) north of Brighton, and nearly 7000 people live there. Hassocks has grown since the 19th century, when work started on the London to Brighton railway. 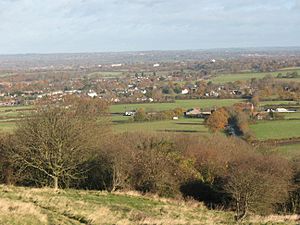 Hassocks viewed from the South Downs.

The village became better known after 2 April 1839 when the first railway line was laid between London and Brighton. Over 6,000 workmen were hired for up to two years building, blasting and clearing rubble beneath the South Downs to create Clayton Tunnel. It is the second longest tunnel on the London to Brighton Line, some 1¼ miles long and 270 feet (82 m) below ground. The opening of Hassocks Gate as the railway station in 1841 saw the beginning of the village that is known today. In 1861 there was a collision between two trains, which killed 23 people and injured 176 others.

Today Hassocks has lots of shops and a well-used community centre called Adastra Hall. It is quite expensive to buy a house in Hassocks, though it is not quite as expensive as neighbouring Ditchling and Hurstpierpoint. These villages have many nice, older buildings whereas Hassocks village centre was mainly built after World War Two.

Hassocks railway station serves the village. There are regular train services to London and Brighton.

Hassocks Infant School is a maintained infant school for pupils aged 4 to 7. It currently caters for around 180 pupils. The school is centrally located in the village.

After leaving the Infant School children in the main go onto Windmills School in Dale Avenue which caters for years 3–6.

Secondary education for the village and surrounding areas is looked after by Downlands Community School.

A new sports hall and AstroTurf football pitch have recently been constructed at Downlands Community School. 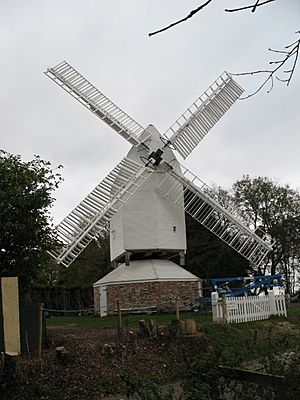 There is a windmill being worked on by lots of local volunteers to try and get it back to working condition again as it was completely ruined. The windmill made flour for the first time in 100 years in October 2008.

All content from Kiddle encyclopedia articles (including the article images and facts) can be freely used under Attribution-ShareAlike license, unless stated otherwise. Cite this article:
Hassocks Facts for Kids. Kiddle Encyclopedia.