Kids Encyclopedia Facts
This page is about the city. For the adjacent town, see Hayward (town), Wisconsin.

Hayward is a city in Sawyer County, Wisconsin, United States, next to the Namekagon River. The population was 2,318 at the 2010 census. It is the county seat of Sawyer County. The city is surrounded by the Town of Hayward.

Hayward was "named for Anthony Judson Hayward, a lumberman who located the site for building a saw-mill, around which the town grew."

Logging began in the late 1850s. Loggers came from Cortland County, New York, Carroll County, New Hampshire, Orange County, Vermont, Down East Maine in what is now Washington County, Maine and Hancock County, Maine. These were "Yankee" migrants, that is to say they were descended from the English Puritans who had settled New England during the 1600s. They were mostly members of the Congregational Church. In the 1890s immigrants came from a variety of countries such as Germany, Norway, Poland, Ireland and Sweden.

There were 1,048 households, of which 27.6% had children under the age of 18 living with them, 32.5% were married couples living together, 14.0% had a female householder with no husband present, 5.9% had a male householder with no wife present, and 47.5% were non-families. 41.7% of all households were made up of individuals, and 20% had someone living alone who was 65 years of age or older. The average household size was 2.10 and the average family size was 2.80.

Hayward has a public bus service, Namekagon Transit, which has three separate lines. Route 30 starts at Walmart and runs through the town with stops at Sawyer County Courthouse and Marketplace Foods, and then runs to the transfer center at the Sevenwinds Casino. Here one can transfer to or from Lines 40 or 60. Route 40 runs in a complete circuit route past Round Lake and to some other rural neighborhoods around the areas, and then arrives back at the transfer center. Route 60 runs south from the casino, making two stops, then diverging into two lines at the LCO Country Store. One heads on CTH-K, and eventually terminates in the North Woods Beach neighborhood; the other heads on CTH-E and terminates in the unincorporated community of Reserve. Namekagon Transit also has Door Stop Services in Sawyer, Barron, Washburn, and some parts of Bayfield counties. 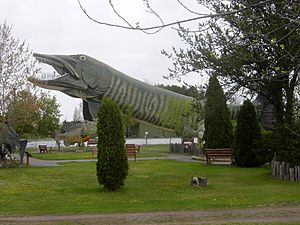 Hayward is a popular fishing destination because of the many lakes in the area including Lac Courte Oreilles, Grindstone Lake, Round Lake, Moose Lake, Spider Lake, Windigo Lake, and the Chippewa Flowage, which are known for yielding trophy-sized muskellunge ("muskie" or "musky"), northern pike, walleye, and smallmouth bass. It is also home to the "Quiet Lakes" (Teal, Ghost and Lost Land Lakes), which do not allow water sports as do the larger lakes.

The National Fresh Water Fishing Hall of Fame is located in Hayward. It contains a 143-foot (44 m) fiberglass musky, the world's largest fiberglass structure. Tourists can climb up into the mouth of the fish, and look over the town, as well as Lake Hayward. In addition to fishing, Hayward is also a hot spot for deer hunting, golfing, cross-country skiing, snowmobiling, canoeing, kayaking, horseback riding, and road and mountain biking.

Sawyer County, where Hayward is located, has over 600 miles of groomed snowmobile trails, including 335 miles that run through county forests and connect with trails in adjoining counties.

ATV (quad bikes) riding along existing county forest logging roads is permitted. There are 95.7 miles of state-funded ATV trails for winter use and 80.8 miles designated for summer use. State owned trails include the Tuscobia Trail (51 miles), which runs from the Flambeau River to the western county line and the Dead Horse Connector (38 miles) in the eastern Flambeau Forest. The trail system also connects to 140 miles of trail within the Chequamegon National Forest. Hayward allows ATVs on some roads within the city.

The annual Chequamegon Fat Tire Festival is the largest mass start mountain bike race in the United States. The first Fat Tire Festival was held in 1983 with 27 riders, and in 2008 the race was capped at 2500 competitors. The two main races include the 40-mile “Chequamegon 40”, and the 16-mile “Short and Fat.”

Participants in the annual Lumberjack World Championships compete in a variety of lumberjack games such as log rolling, chopping, sawing, and chainsaw events.

Hayward hosts the American Birkebeiner cross-country skiing race, the largest cross country ski marathon in North America. The American Birkebeiner first started in 1973. No U.S. Ski Team members were in it, or any foreign skiers. It was unknown then. But today over 13,000 skiers race every year. It is one of Haywards largest and most popular tourist attractions.

The Lac Courte Oreilles Band of Ojibwe host several powwows throughout the year. The largest pow-wow in North America is held annually in the third weekend of July in Hayward. The Honor the Earth Pow-wow honors mother Earth and the Creator.

The Park Theatre is a performing arts center in Hayward, located on Highway 63. The Park Center is operated by the Cable Hayward Area Arts Council (CHARAC). A variety of musical and artistic performances are presented, throughout the year.

Hayward officially has one sister city:

All content from Kiddle encyclopedia articles (including the article images and facts) can be freely used under Attribution-ShareAlike license, unless stated otherwise. Cite this article:
Hayward, Wisconsin Facts for Kids. Kiddle Encyclopedia.