Isle La Motte is an island in Lake Champlain in northwestern Vermont, United States. It is the most remote and northern of the Champlain Islands. It is 7 by 2 miles (11.3 by 3.2 km). It lies close to where the lake empties into the Richelieu River. It is incorporated as a New England town in Grand Isle County. 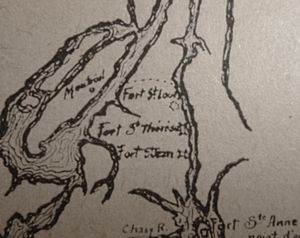 Map of Fort Sainte-Anne and other forts on the Richelieu River, circa 1666 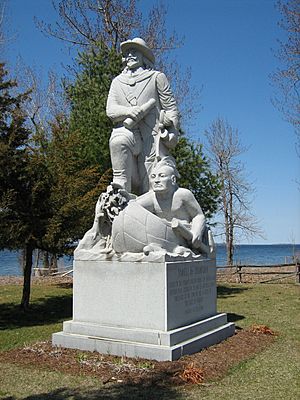 Statue of Champlain and guide on Isle La Motte, Vermont

On 9 July 1609, Samuel de Champlain debarked on the island.

In 1665 the French began building a series of forts along the Richelieu River to protect New France from the Iroquois. From north to south these were Fort Richelieu, Fort Chambly, and Fort Sainte Thérèse.

Four companies of the Carignan-Salières Regiment were sent from Québec to extend these forts further south, under Captain Pierre La Motte. They built a trail connecting Fort Sainte Thérèse and Fort Saint-Louis (Chambly).

In 1666 Fort Saint-Jean, and the furthest south Fort Sainte Anne, on Isle La Motte were added. The fort included Saint Anne's Shrine. Both the fort and chapel were dedicated to Sainte Anne. In 1668, the bishop of Quebec, François de Laval, came to Isle La Motte to baptise a number of Iroqouis to Christianity. Even after the abandonment of the fort, the shrine continued to give mass to worshipers. The fort was the first European settlement in what is now Vermont.

Fort St. Anne was the one most vulnerable to attack. The fort was garrisoned by about 300 French soldiers over the next four years, after which the troops were pulled back to Québec, destroying the fort before they left.

In the mid 1800s orchards, vineyards and dairy farms flourished on the island, which was then connected to the mainland by ferry during the warmer months and by foot or wagon over the ice in winter. In November of 1802, Isle La Motte was renamed to "Vineyard." However, 28 years later the original name was restored in November of 1803. In 1878 the town was incorporated for the sole purpose of building a bridge to Alburgh. The bridge was completed in 1882.

Until around 1970, the island was on the main route from New England to Montreal via Route 2 until traffic was rerouted via the Interstate 89.

The island, along with Valcour Island was formed 480 million years ago as a reef during the Ordovician Period in a shallow tropical sea, near where Zimbabwe is today. At that time there was no life on dry land except for a few primitive plants such as mosses and algae. Almost all of life was in the oceans. Carbon dioxide levels were 14–16 times higher than today with high sea levels covering much of the continents, which were mostly located south of the equator. The stromatoporoid patch reef, one of the oldest known metazoan reefs, originally stretched a thousand miles from what is now Quebec to Tennessee but only a few remnants remain today. The island's fossil reefs are part of the Chazy Fossil Reef, a National Natural Landmark dedicated in 2009.

Reef builders during this period in earth history were principally bryozoa, stromatolites, stromatoporoids, sponges, and algae. Other marine life included cephalopods, gastropods, crinoids, and trilobites. Today fossil gastropods (snails) can be seen at the abandoned quarries.

Black limestone from the Chazy Formation was quarried on the island, the oldest quarry, behind Fisk Farm started as early as 1832.

The limestone is composed of calcite and fossils of marine creatures. It is so dark in appearance that it was marketed in the 18th and 19th century as black marble and was used for the construction of the U.S. Capitol building and the National Gallery of Art. Structures made of the stone still visible on the island are: the Isle La Motte Public Library, the Isle La Motte Methodist Church, Isle La Motte Historical Society (formerly the South Stone School House), Ruins of the Fisk House at Fisk Farm, and the original Fisk House (once owned by Lieutenant Governor Nelson Fisk).

All content from Kiddle encyclopedia articles (including the article images and facts) can be freely used under Attribution-ShareAlike license, unless stated otherwise. Cite this article:
Isle La Motte Facts for Kids. Kiddle Encyclopedia.