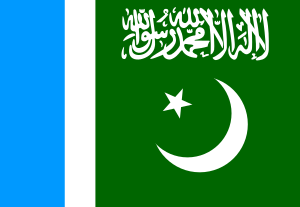 The Jamaat-e-Islami Pakistan (Urdu: جماعتِ اسلامی, Jamaat-i-Islami, "Islamic Party" Jamaat, JIP) is a Muslim religious, political party in Pakistan. It was founded on 26 August 1941 in Lahore by Muslim theologian Maulana Sayyid Abul Ala Maududi. It is the oldest religious party in Pakistan.

Founded during British rule in India, the Jamaat moved its organisation after the Partition of India to the newly-created Muslim state of Pakistan. The members who remained in India regrouped to form an independent organization.

All content from Kiddle encyclopedia articles (including the article images and facts) can be freely used under Attribution-ShareAlike license, unless stated otherwise. Cite this article:
Jamaat-e-Islami Pakistan Facts for Kids. Kiddle Encyclopedia.