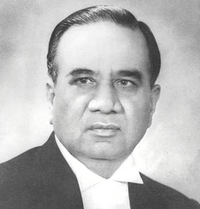 Huseyn Shaheed Suhrawardy (September 8, 1892 - December 5, 1963) was a politician from Bengal in undivided India, and later in East Pakistan. He served as Prime Minister of Pakistan from 1956 until 1957. He is also known for his controversial role in the Direct Action Day of August 16, 1946. Following riots in Bengal during the last days of India's fight for freedom, he was considered a favourite of Muhammad Ali Jinnah. He is also considered to be the first populist leader in Pakistan's history. He is the founder of the Awami League, one of the two major political parties of present day Bangladesh.

All content from Kiddle encyclopedia articles (including the article images and facts) can be freely used under Attribution-ShareAlike license, unless stated otherwise. Cite this article:
Huseyn Shaheed Suhrawardy Facts for Kids. Kiddle Encyclopedia.