Egg Harbor Township was first mentioned as part of Gloucester County in records dating back to March 20, 1693, and at times was called New Weymouth. The township's western boundary was established on May 13, 1761, with the area called Great Egg-Harbour Township. Portions of the township were taken to form Galloway Township, which was established by Royal charter on April 4, 1774. Additional portions were taken to form Weymouth Township on February 12, 1798. On February 21, 1798, the area was incorporated as Egg-Harbour Township. Over the ensuing centuries, portions of the township were taken to create many new municipalities: Hamilton Township on February 5, 1813; Atlantic City on May 1, 1854; Absecon on May 1, 1854; South Atlantic City (now Margate City) on September 7, 1885; Pleasantville on January 10, 1889; Linwood on February 20, 1889; Somers Point on April 24, 1886; Longport on March 7, 1898; Ventnor City on March 17, 1903; and Northfield on March 21, 1905.

Great Egg Harbor got its name from Dutch explorer Cornelius Jacobsen Mey. In 1614, Mey came upon the inlet to the Great Egg Harbor River. The meadows were so covered with shorebird and waterfowl eggs that he called it "Eieren Haven" (Egg Harbor).

The first residents of what would become Egg Harbor Township were the Lenni Lenape Native Americans, who would spend their summers on the elevated land around the cedar swamp that is now Bargaintown Lake, as well as along the banks of Patcong Creek, where they made use of the abundant fish, shellfish, wild berries, and bird's eggs in the area and collected shells that could be carved to make wampum.

Great Egg Harbor was originally part of Gloucester County. In 1694 a law was passed that read "forasmuch as there are families settled upon the Egg Harbor, and of right ought to be under some jurisdiction, be it enacted by the authority aforesaid that the inhabitants of the said Egg Harbor shall and do belong to the jurisdiction of Gloucester."

In 1710, by an Act of the Legislature, legal boundaries of Gloucester County were set from the Delaware River, along the Burlington County line to the sea and back up the Great Egg Harbor River to the Delaware River. At that time Great Egg Harbor encompassed all of present-day Atlantic County. In 1837, Atlantic County was set apart from Gloucester County and the Townships were Egg Harbor, Galloway, Hamilton and Weymouth.

Portions of the township, notably the West Atlantic City and Anchorage Poynte areas, are not contiguous to the main body of the municipality, having been separated from the mainland portion of the township as municipalities were formed, largely since the boroughitis phenomenon in the 1890s.

The township is one of 56 South Jersey municipalities that are included within the New Jersey Pinelands National Reserve, a protected natural area of unique ecology covering 1,100,000 acres (450,000 ha), that has been classified as a United States Biosphere Reserve and established by Congress in 1978 as the nation's first National Reserve. Part of the township is included in the state-designated Pinelands Area, which includes portions of Atlantic County, along with areas in Burlington, Camden, Cape May, Cumberland, Gloucester and Ocean counties.

Note: This includes the adjacent municipalities that are in the "West Atlantic City and Anchorage Poynte" sections. 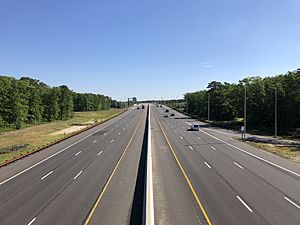 The Atlantic City Expressway runs through east–west for 5.3 miles (8.5 km) connecting Pleasantville in the east to Hamilton Township in the west and connects at Interchange 7 with the Garden State Parkway (at Interchange 38) that runs through north–south for 8.6 miles (13.8 km) connecting Somers Point in the south to Galloway Township in the north.

Major county roads that pass through include CR 559, CR 563, CR 575 and CR 585. US Route 40/322 run concurrent with each other while going from east to west. US Route 9 also runs through, although very briefly concurrent with the Parkway as it crosses over the Great Egg Harbor.

A majority of the Atlantic City Airport is located in the northern area of the township.

Harbor Square (formerly the Shore Mall) is a redesigned regional mall that had originally opened in 1968, located on U.S. Route 40 / U.S. Route 322.

Development and the Pine Barrens

Egg Harbor Township (along with Hamilton and Galloway Townships) were designated as Regional Growth Areas" by the New Jersey Pinelands Commission resulting in increased residential development. In exchange for the development in Egg Harbor Township, no trees are demolished for housing and other buildings in the Pine Barrens, also known as the Pinelands. The "Regional Growth Area" designation was, and remains, tantamount to a state mandate to construct +/-30,000 additional housing units in Egg Harbor Township. Neighboring communities, Galloway Township (to the north) and Hamilton Township (to the West) were also designated as "Growth Areas" by the New Jersey Pinelands Commission.

On January 22, 2007, the Egg Harbor Township Planning Board issued site approval for 667 new homes (and a new fire station) in the "Farmington" section of Egg Harbor Township. The "Village at Farmington" will be developed by PulteGroup and is proposed to include 140 townhouses, 261 planned adult homes (55 and older) and 259 single family detached dwellings, as well as a community clubhouse, a second club house for 55 and older, recreation fields and walking paths to be constructed on a site covering 273.6 acres (1.107 km2). PulteGroup will pay over $800,000 to the Egg Harbor Township recreation fund because the club houses and paths do not satisfy the township's recreation requirements for a development of this size and, as part of the approval, PulteGroup will also contribute $350,000 toward the construction of a new Farmington Fire Station with the landowners, Schoffer Enterprises, donating the land. 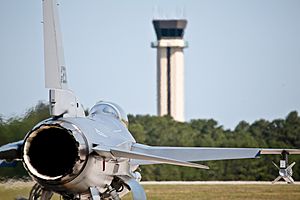 Once approvals are complete, PulteGroup will build 60 units of each type per year until the project is complete, offering single family homes in the mid $300,000's and the adult homes for $250,000.

The Planning Board has requested that paperwork presented to the homeowners at purchase will "fully disclose" to prospective purchasers that there exists a nearby airport (Atlantic City International Airport, which, in addition to functioning as a full service airport, is home to the 177th wing of the Air National Guard, the FAA Technical Center, a Homeland Security Department Training Center as well as the Atlantic City base of Operations for the United States Coast Guard), meaning they will be in the proximity of the approach and takeoff patterns for both incoming and outgoing aircraft, the Atlantic County Municipal Utility Authority (ACMUA), where all local municipalities bring their trash and recycle. The disclosure will inform prospective buyers that, from time to time, the ACMUA Facility is odoriferous and that a training/shooting range is part of the military/industrial portion of the Airport.

Township public school students are also eligible to attend the Atlantic County Institute of Technology in the Mays Landing section of Hamilton Township or the Charter-Tech High School for the Performing Arts, located in Somers Point.

As of 2020[update] Bishop McHugh Regional School in Dennis Township in Cape May County takes students from Egg Harbor Township. The school is under the Roman Catholic Diocese of Camden.

People who were born in, residents of, or otherwise closely associated with Egg Harbor Township include:

All content from Kiddle encyclopedia articles (including the article images and facts) can be freely used under Attribution-ShareAlike license, unless stated otherwise. Cite this article:
Egg Harbor Township, New Jersey Facts for Kids. Kiddle Encyclopedia.