Kettering is a city in Montgomery and Greene counties in the U.S. state of Ohio, almost entirely in Montgomery County. It is a suburb of Dayton. As of the 2010 census, the city had a population of 56,163, making it the largest suburb in the Dayton Metropolitan Statistical Area.

The area where the city of Kettering now lies was settled from the late 1700s to the mid-1800s, largely as farmland. The population in the area started to grow, prompting the creation of (now defunct) Van Buren Township in 1841. In November 1952, township voters approved incorporating as the Village of Kettering. (In 1953, the western portion of the village voted to secede, forming a new township, which is now the City of Moraine). By 1955, the village's population had grown to 38,118, which qualified it to claim city status, with the official proclamation by the state on June 24. The city is named for inventor Charles F. Kettering, who resided here in his home, Ridgeleigh Terrace, from 1914 until his death in 1958. Charles Kettering is known for his numerous inventions and contributions to the Dayton area.

From the 1950s to the 1970s, Kettering's population continued to grow, adding more than 30,000 residents. This growth was due in part to the many people who started migrating out of nearby Dayton after World War II. Since the 1980s, Kettering has seen a slow decline in population because of an aging population and loss of manufacturing jobs.

There were 25,427 households of which 26.3% had children under the age of 18 living with them, 43.4% were married couples living together, 11.3% had a female householder with no husband present, 4.3% had a male householder with no wife present, and 41.1% were non-families. 34.9% of all households were made up of individuals and 13.1% had someone living alone who was 65 years of age or older. The average household size was 2.19 and the average family size was 2.83.

The Kettering Fire Department is responsible for fire protection in the city. The department has a total of six operational stations and is staffed by 54 career and 50 volunteer firefighters. The fire department is currently undergoing a transformation to reduce the number of stations to five. One station is currently being built on Far Hills Ave, one will be located on the corner of East David Rd. and Hempstead Station Drive. The three others are in the planning stage. 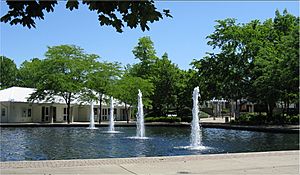 The fountains and administrative building for Fraze Pavilion

Kettering has 20 parks totaling 284 acres (1.15 km2) and is home to the Fraze Pavilion, a major outdoor entertainment venue that also hosts the summer concerts of the Dayton Philharmonic.

The new James S. Trent Arena, with seating for 3,300 for concerts and commencements and 3,650 for championship sporting events is on the campus of Fairmont High School.

Skate Plaza, a 40,000-square-foot (3,700 m2) skateboard park that opened in 2005, was a collaboration between the City of Kettering and Rob Dyrdek, a professional skateboarder who grew up in Kettering.

Rosewood Arts Center, formerly an elementary school, now hosts 100,000 visitors a year with art classes, exhibitions, an art gallery and the Art on the Commons festival.

The Town and Country Shopping Center is a small, part enclosed and part open-air, mall located in the heart of Kettering near the intersection of Far Hills Ave. and Stroop Rd.

All content from Kiddle encyclopedia articles (including the article images and facts) can be freely used under Attribution-ShareAlike license, unless stated otherwise. Cite this article:
Kettering, Ohio Facts for Kids. Kiddle Encyclopedia.