There are numerous interpretations of the name, which is from the language of the Kittitas American Indian language. According to one source, it "has been said to mean everything from 'white chalk' to 'shale rock' to 'shoal people' to 'land of beauty'. Most anthropologists and historians concede that each interpretation has some validity depending upon the particular dialect spoken."

Kittitas was established in 1883 it was officially incorporated on December 9, 1931. It was founded as part of the westward expansion of the Chicago, Milwaukee, St. Paul, and Pacific Railroad, the Kittitas Yard and Depot Became the center of the community of Kittitas: one of the many small, agricultural towns that sprang up along the railroad lines. The railroad linked Kittitas to other small communities and the rest of the country, providing farmers and business people a way to sell their products in other towns and cities.

A post office, general merchandise and drug store, a Baptist church, agricultural warehouses, and other small businesses were built around the small depot. Along with the depot, the Kittitas Yard included storage and maintenance buildings, a water tower, and other structures necessary for the maintenance of a major transcontinental railroad.

The depot is the only significant structure still intact at the Kittitas Yard. It is an excellent example of turn-of-the-century railroad architecture, and as such was placed on the National Register of Historic Places in 1992. The depot is owned and managed by the Washington State Parks and Recreation Commission. 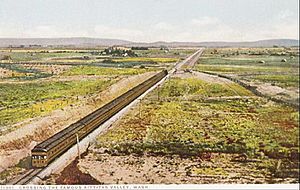 Postcard photo of a Milwaukee Road train in the Kittitas valley circa 1915. The train is either The Olympian or The Columbian.

The Milwaukee Road, the popular name for the Chicago, Milwaukee, St. Paul, and Pacific Railroad, was founded in 1847 to serve the area from Mississippi to Wisconsin. Within 50 years, it became one of the most prosperous railroads in the country. In 1905, Milwaukee Road officials began expanding west, running lines from Chicago to Seattle. At the same time, they decided to electrify the lines through the western mountains, to increase operating efficiency.

Despite the increased efficiency, the financial stability of the railroad began to crumble, prompted by the high cost of the western expansion, electrical expenses, and competition with other railroads and ships using the newly opened Panama Canal. In 1980, the last Milwaukee train traveled over the Cascades and thereafter the system served only the Midwest.

The Milwaukee Road once served as a vital link, providing economic and social connections between small, scattered communities in Washington. Today, it is once more a link between these many communities though rather than riding the rails, people now hike, bike, or ride horses along this route.

Stretching more than 250 miles from Cedar Falls near North Bend to Tekos at the Idaho Border, the John Wayne Pioneer Trail passes through tunnels, over mountains, along rivers and lakes, and through dry, sagebrush countryside.

According to the United States Census Bureau, the city has a total area of 0.76 square miles (1.97 km2), all of it land.

This region experiences warm and dry summers, with no average monthly temperatures above 71.6 °F. According to the Köppen Climate Classification system, Kittitas has a warm-summer Mediterranean climate, abbreviated "Csb" on climate maps. 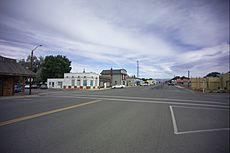 There were 543 households of which 39.2% had children under the age of 18 living with them, 47.1% were married couples living together, 14.7% had a female householder with no husband present, 5.5% had a male householder with no wife present, and 32.6% were non-families. 27.3% of all households were made up of individuals and 9.6% had someone living alone who was 65 years of age or older. The average household size was 2.54 and the average family size was 3.05.

There were 443 households out of which 34.5% had children under the age of 18 living with them, 49.4% were married couples living together, 11.3% had a female householder with no husband present, and 33.4% were non-families. 27.3% of all households were made up of individuals and 8.8% had someone living alone who was 65 years of age or older. The average household size was 2.49 and the average family size was 3.02.

All content from Kiddle encyclopedia articles (including the article images and facts) can be freely used under Attribution-ShareAlike license, unless stated otherwise. Cite this article:
Kittitas, Washington Facts for Kids. Kiddle Encyclopedia.