Kyah Pam Simon (born 25 June 1991) is an Australian professional soccer player who plays as a striker for PSV of the Eredivisie Vrouwen. In 2011, Simon became the first Indigenous Australian player to score a goal in a FIFA World Cup.

Kyah was born in Blacktown, NSW of Aboriginal-Australian descent. Growing up amongst a family of rugby players in Quakers Hill, New South Wales, near Sydney, Australia, Simon began playing football for the Quakers Hill under-8s and fell in love with the game. As a youth, she played for the Hills Brumbies before moving across to Penrith Nepean United. At age fifteen, she broke her leg just on the verge of earning a scholarship with the NSW Institute of Sport, but that did not deter her from pursuing her dream. She made her national debut for the Australia women's national soccer team the following year at age 16. She attended school at Pacific Hills Christian School and Hills Sports High School. 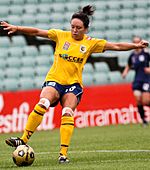 Kyah made her debut for the Central Coast Mariners against Melbourne Victory on Saturday, 25 October 2008. Kyah then made her scoring debut during Round 3 against Canberra United, scoring a double to assist the Mariners to a 2–1 win away from home.

Simon joined Sydney FC for the 2009 W-League Season, playing in the first round against former club the Central Coast Mariners.

In April 2012, Simon signed with the Boston Breakers for the first and only season of the Women's Premier Soccer League Elite (WPSL Elite). She finished the season as the team's leading scorer with 12 goals and 26 points. She also ranked second in the league in the same categories. Simon logged 1,052 minutes with the Breakers and finished with two assists.

In 2013, Simon signed as a free agent with the Breakers for the inaugural season of the National Women's Soccer League.

After being injured for most of the 2013–14 season and hardly playing, Simon returned to Sydney FC for the 2014 season.

On 30 June 2015, after leading the Australia women's national soccer team to a quarter-final of the 2015 FIFA Women's World Cup, the Boston Breakers announced the signing of Kyah Simon; returning her to the National Women's Soccer League.

In January 2017, citing a need to "get my mind and body back to 100 percent health and fitness, and be ready for the next season", it was announced that Simon would not return to the Boston Breakers for the 2017 season. The Breakers retain the rights to her contract for the 2017 season.

After the Breakers folded ahead of the 2018 NWSL season, the NWSL held a dispersal draft to distribute Breakers players across the league. Her rights were selected 6th overall by Houston. On 28 February, the Dash announced they signed Simon to a contract. She made her debut for the Dash on 28 April against the North Carolina Courage in a 2–0 loss. Simon scored her first goal of the season in a 1–1 draw against the Portland Thorns FC on 9 May. Following the 2019 NWSL season, the Dash and Kyah came to a mutual agreement to depart the club, placing her on the re-entry wire. 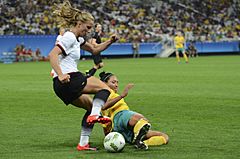 Simon made her debut for the Australia women's national soccer team in August 2007, at the age of 16, in a match against Hong Kong. She scored her first goal in a win over Brazil in the 2008 Peace Cup. In 2010, she scored the winning penalty for Australia to win the 2010 Asian Cup.

Simon appeared at the 2011 FIFA Women's World Cup, where she scored both of Australia's goals in a 2–1 win over Norway to ensure qualification for the quarter finals. She was the first male or female Indigenous Australian player to score a goal in a World Cup tournament.

During the 2015 FIFA Women's World Cup round of 16 match against higher ranked Brazil, Simon slotted in the winning goal on a rebound after an initial attempt by Lisa De Vanna bounced off the Brazilian goalkeeper Luciana. The Matildas qualified for a historic quarter-final match after the 1–0 win against Brazil, however were knocked out by Japan in the quarterfinal. Simon played each of Australia's 5 matches and scored 3 goals, including both goals in a 2–0 win against Nigeria in group stage. 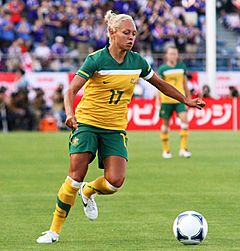 All content from Kiddle encyclopedia articles (including the article images and facts) can be freely used under Attribution-ShareAlike license, unless stated otherwise. Cite this article:
Kyah Simon Facts for Kids. Kiddle Encyclopedia.