Lake Willoughby is a lake in the town of Westmore in Orleans County in the Northeast Kingdom of Vermont, United States. 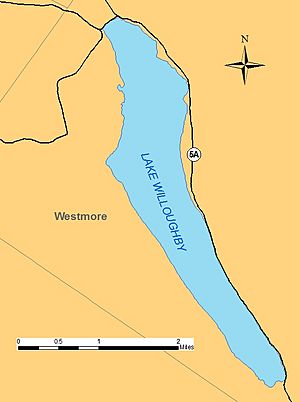 In 2010, Yankee magazine named Willoughby as the third best lake in New England.

Willoughby Lake has a public beach that stretches 0.4 kilometres (0.25 mi) on the north shore of the lake, or in the zone of the lake outlet. Another public beach is located at the bottom of the South Bay of the Lake. The village of Westmore is located on the east side, at the confluence area of Mill Creek which drains the waters of Long Pond. Many cottages and houses are located on North-East bank of the lake.

The lake is known for its clarity and chilly temperature. Because of its depth, the surface of the lake freezes later than other lakes in the Northeast Kingdom.

Prior to the floods of 1927, the river had three dams. All were destroyed by the flood. An iron bridge that ran from Evansville to Brownington Center was destroyed and rebuilt.

A dam where the Whetstone Dam had formerly stood, was rebuilt to run a sawmill, which was still in operation in 2008. The "state Fish and Game Department" bought the dam rights to allow rainbow trout to swim upriver.

A view from the north end of the lake shows Mount Pisgah (left) and Mount Hor rising up above the surface.

The rock between Mount Pisgah on the east and Mount Hor on the west was eroded by a valley ice lobe. This ice flow cut across the Willoughby granodiorite and adjacent metamorphic rocks. The ice flow may have exploited highly fractured bedrock along the margin of the Willoughby pluton or joint surfaces within the pluton.

Other mountains in territory of Westmore, Vermont are on:

Willoughby is listed as a National Natural Landmark. Willoughby contains rainbow trout (wild and stocked), lake trout, landlocked Atlantic salmon (mainly stocked), rainbow smelt, burbot, yellow perch, longnose sucker, white sucker, lake chub, common shiner, and round whitefish which is a native species of extremely limited distribution in Vermont. Steelhead trout (rainbow trout) are not native to the region, but were imported to Lake Memphremagog from the Pacific Northwest. They migrate up the Barton River and Willoughby River to the lake to spawn.

The sheer cliffs of Mount Pisgah and Mount Hor provide an environment conducive for arctic and cliff-alpine plants, as well as ideal nesting areas for the rare peregrine falcon.

More than 100 bird species have been recorded around the lake including thrushes, warblers, hummingbirds, jays, finches, loons, herons and gulls.

Tiny steam boats operated on the lake for tourists from 1884 to the early 1900s when steam was replaced by the gasoline engine.

In 1915, Robert Frost mentioned the lake in a poem, "A Servant to Servants,
"I see it's a fair, pretty sheet of water,
Our Willoughby! How did you hear of it?
I expect, though, everyone's heard of it.
In a book about ferns? Listen to that!"

Devil's Rock, located on the Mount Pisgah side of the lake at a less than halfway point from the lake's southern beach, is a popular diving spot for daring locals and vacationers. It takes its name from a painted image of a devil on the front of the rock facing out toward the lake. It is also called Devil's Rock because when reflected in still water, the image of a skull lying on its side can be seen.

Along the eastern shore, there are a series of natural waterslides that flow into Lake Willoughby. In the winter, these turn into an ice wall which is used by ice climbers.

Lake facilities offer swimming, hiking, and ice fishing. Surrounding the Willoughby Lake, there are some campgrounds and cottage rental services for tourists. The Route 5A runs along the lake's eastern edge.

All content from Kiddle encyclopedia articles (including the article images and facts) can be freely used under Attribution-ShareAlike license, unless stated otherwise. Cite this article:
Lake Willoughby Facts for Kids. Kiddle Encyclopedia.