The Women's Tennis Association (WTA) world number one ranking is a 52-week system based on the total points won by a female professional tennis player, during a WTA season. The WTA started ranking players on 3 November 1975, and 21 women have achieved the number one status in singles and 32 players in doubles.

The rankings are sourced by the WTA Media Guide and the WTA website (which usually revises its rankings every Sunday night or Monday morning, except when tournament finals are postponed).

Steffi Graf spent 377 weeks at the top of the WTA, the most of any player.

Weeks at No. 1 by country

as of June 2018[update]; current No. 1 player in bold
* Note that Monica Seles is included twice due to change of citizenship.

Players who were ranked world No. 1 without having won a Grand Slam tournament 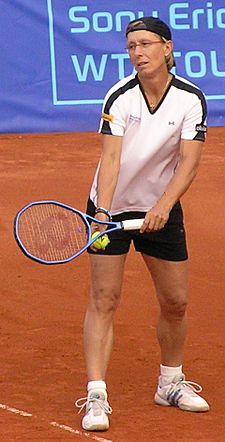 Martina Navratilova was world No. 1 in doubles for a record 237 weeks

Weeks at number 1 by country

All content from Kiddle encyclopedia articles (including the article images and facts) can be freely used under Attribution-ShareAlike license, unless stated otherwise. Cite this article:
List of WTA number 1 ranked players Facts for Kids. Kiddle Encyclopedia.