Lost Springs is a city in Marion County, Kansas, United States. It was named for the old lost spring near the city. As of the 2010 census, the city population was 70. 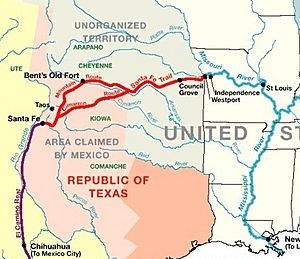 From the 1820s to the 1870s, one of the most significant land routes in the United States was the Santa Fe Trail. The "Lost Spring" was one of the favorite camping spots on the Santa Fe Trail because it generally had an ample supply of good water. It was located 15 miles west of Diamond Spring, which was a day's travel for a wagon train. The spring apparently got its name because it is a periodic spring, drying up at times for a week, a month, or even two years, so those visiting the site sometimes could not locate the spring on a return trip. A stage station was set up nearby in 1859 and was known as the Lost Springs Station, but no visible evidence remains of the station. The trail was active across Marion County from 1821 to 1866.

In 1887, the Chicago, Kansas and Nebraska Railway built a branch line north-south from Herington through Lost Springs to Caldwell. It foreclosed in 1891 and was taken over by Chicago, Rock Island and Pacific Railway, which shut down in 1980 and reorganized as Oklahoma, Kansas and Texas Railroad, merged in 1988 with Missouri Pacific Railroad, and finally merged in 1997 with Union Pacific Railroad. Most locals still refer to this railroad as the "Rock Island".

At some point, the "Santa Fe" line from Neva to Lost Springs was pulled but the right of way has not been abandoned. This branch line was originally called "Strong City and Superior line" but later the name was shortened to the "Strong City line". The two railways are connected via a switch to allow north-bound "Rock Island" traffic to connect onto the north-west-bound "Santa Fe" tracks. This is the only way for the Santa Fe traffic to travel north-west after removing the tracks to Neva.

The National Old Trails Road, also known as the Ocean-to-Ocean Highway, was established in 1912, and was routed through Lehigh, Hillsboro, Marion, Lost Springs.

The climate in this area is characterized by hot, humid summers and generally mild to cool winters. According to the Köppen Climate Classification system, Lost Springs has a humid subtropical climate, abbreviated "Cfa" on climate maps.

Lost Springs has one listing on the National Register of Historic Places (NRHP).

There were 30 households out of which 36.7% had children under the age of 18 living with them, 56.7% were married couples living together, 16.7% had a female householder with no husband present, and 23.3% were non-families. 23.3% of all households were made up of individuals and 13.3% had someone living alone who was 65 years of age or older. The average household size was 2.37 and the average family size was 2.70.

All content from Kiddle encyclopedia articles (including the article images and facts) can be freely used under Attribution-ShareAlike license, unless stated otherwise. Cite this article:
Lost Springs, Kansas Facts for Kids. Kiddle Encyclopedia.