The Marlborough Region, commonly known simply as Marlborough, is one of the regions of New Zealand, located in the northeast of the South Island. Marlborough is a unitary authority, both a region and a district, and its council is located at Blenheim. It has a population of 45,500 (June 2016) .

Marlborough is known for its dry climate, the picturesque Marlborough Sounds, and Sauvignon blanc wine. It takes its name from the earlier Marlborough Province, which was named after John Churchill, 1st Duke of Marlborough, an English general and statesman.

Marlborough's geography can be roughly divided into four sections. Two of these sections, in the south and the west, are mountainous. This is particularly true of the southern section, which rises to the peaks of the Kaikoura Ranges. These two mountainous regions are the final northern vestiges of the ranges that make up the Southern Alps, although that name is rarely applied to mountains this far north.

Between these two areas is the long straight valley of the Wairau River. This broadens to wide plains at its eastern end, in the centre of which stands the town of Blenheim. This region has fertile soil and temperate weather, enabling it to become the centre of the New Zealand wine industry.

The fourth geographic zone lies along its north coast. Here the drowned valleys of the Marlborough Sounds make for a convoluted and attractive coastline. The town of Picton is located at the southern end of one of the larger sounds, Queen Charlotte Sound. The town of Havelock is located at the southern end of the Pelorus Sound, the Pelorus Sound also feeds into the Kenepuru Sound. 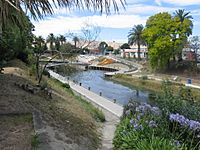 Blenheim is the region's capital and largest town, with 30,500 residents.

The major towns are:

Main page: List of rivers of the Marlborough Region 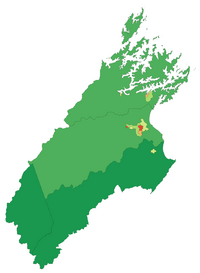 Marlborough is administered by a unitary authority, the Marlborough District Council. Between 1859 and 1876 Marlborough had its own provincial government, and was known as the Marlborough Province, which ended when the Abolition of the Provinces Act came into force on 1 Nov 1876.

Much of the region's population is found around the coastal plains around and to the south of the mouth of the Wairau, and in smaller settlements along the coast of the Sounds. Apart from the main urban areas of Blenheim and Picton, Marlborough's towns include Havelock, Renwick, Ward, and Seddon.

All content from Kiddle encyclopedia articles (including the article images and facts) can be freely used under Attribution-ShareAlike license, unless stated otherwise. Cite this article:
Marlborough Region Facts for Kids. Kiddle Encyclopedia.