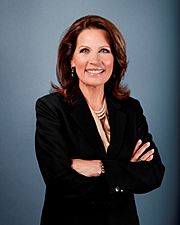 Michele Marie (née Amble) Bachmann (born April 6, 1956) is a Republican politician and activist. Since 2007 she has been a United States Congresswoman from Minnesota.

She was born in Waterloo, Iowa but grew up in Anoka, Minnesota. At age 16 she became a born again Christian. In 1974 she spent a summer on a Kibbutz near Beer Sheva, Israel. She went to college at Winona State University. In the 1980s and 90s, she was a tax attorney. She was also a pro-life advocate. She served in the Minnesota State Senate from 2001 to 2007. Since 2007, she has been a U.S. Congresswoman from Minnesota's 6th district. Bachmann is one of the leaders of the Tea Party movement in Congress. She started the Congressional Tea Party Caucus. She has often been critical of President Obama, who she considers anti-American. Bachmann has been critical of the American education system, in part because it teaches evolution. Bachmann also does not believe in global warming. In June 2012, she said that she was running for President of the United States.

She is married to Marcus Bachmann. They live in Stillwater, Minnesota where they run a mental health care practice with 42 employees. They have five children and 23 foster children.

All content from Kiddle encyclopedia articles (including the article images and facts) can be freely used under Attribution-ShareAlike license, unless stated otherwise. Cite this article:
Michele Bachmann Facts for Kids. Kiddle Encyclopedia.