Michael Babcock Jr. (born April 29, 1963) is a Canadian professional ice hockey coach currently serving as head coach of University of Saskatchewan men's ice hockey program. He previously spent parts of eighteen seasons as head coach in the National Hockey League (NHL). He began as head coach of the Mighty Ducks of Anaheim, whom he led to the 2003 Stanley Cup Finals. In 2005, Babcock signed with the Detroit Red Wings, winning the Stanley Cup with them in 2008, and helping them to the Stanley Cup playoffs every year during his tenure, becoming the winningest coach in Red Wings history. In 2015, he left Detroit after ten seasons to coach the Toronto Maple Leafs, a position he held until 2019.

Babcock was born in Manitouwadge, Ontario, and grew up in Saskatoon, Saskatchewan. As of September 2021, he is the only coach to gain entry to the Triple Gold Club (Stanley Cup title, IIHF World Championship title, and Olympic gold medal in men's ice hockey). He guided the Red Wings to the Stanley Cup in 2008; he led Team Canada to gold at the IIHF Ice Hockey World Championships in 2004; and he led Team Canada to gold at both the 2010 Winter Olympics in Vancouver, and the 2014 Winter Olympics in Sochi. Babcock is the only coach to win six distinct national or international titles. In addition to the three distinct titles described above, he guided Canada to gold at the 2016 World Cup of Hockey, to gold at the IIHF World Junior Championships in 1997, and the University of Lethbridge to the CIS University Cup in 1994. 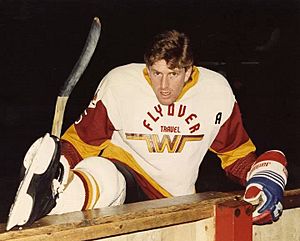 Mike Babcock playing in the United Kingdom in 1987 as a player-coach for Whitley Warriors.

Babcock played for the Saskatoon Blades of the WHL in 1980–81, and spent a season with the Kelowna Wings in 1982–83. In between, he played a year under Dave King at the University of Saskatchewan, and transferred to McGill University in 1983, to play for coach Ken Tyler. In September 1985, Babcock also had a brief try-out with the NHL's Vancouver Canucks. While at McGill University, Babcock joined the Tau Alpha chapter of Delta Kappa Epsilon fraternity.

Babcock graduated from McGill in 1986 with a bachelor's degree in physical education, and also did some post-graduate work in sports psychology. In 146 career games with the Redmen, he tallied 22 goals and 85 assists for a total of 107 points and 301 penalty minutes, graduating as the second-highest scoring defenceman in McGill history. Playing for McGill from four seasons, 1983–84 to 1986–87, he was a two-time all-star rearguard, served as captain, and also won the Bobby Bell trophy as team MVP.

He moved to the United Kingdom in 1987 as a player-coach for Whitley Warriors, who missed out on the league title by two points. In 49 games, he contributed 45 goals and 127 assists, accumulating 123 penalty minutes.

Babcock is one of four McGill University players to coach an NHL team (Lester Patrick with the New York Rangers; George Burnett with the Edmonton Oilers; and Guy Boucher with the Ottawa Senators). In 2008, Babcock became the second McGill hockey player to coach a Stanley Cup winner, the first being Lester Patrick.

Babcock has had a distinguished coaching career, and entered the 2011–12 season with a lifetime 798–540–148 regular season coaching record in 18 seasons overall, including a 373–188–95 NHL mark in eight seasons (two with Anaheim and six with Detroit). He also guided Team Canada to gold medals at the 1997 world junior championships in Geneva, the 2004 IIHF world hockey championships in Prague, the 2010 Winter Olympics in Vancouver, the 2014 Winter Olympics in Sochi and the 2016 World Cup of Hockey in Toronto. In addition, he guided the University of Lethbridge to a CIS national title in 1994.

In 1988, Babcock was appointed head coach at Red Deer College in Alberta. He spent three seasons at the school, winning the provincial collegiate championship and earning coach-of-the-year honours in 1989.

Babcock moved to the Western Hockey League (WHL) in 1991, where he guided the Moose Jaw Warriors for a two-year term.

He then served one season as coach of the University of Lethbridge Pronghorns, earning Canada West coach-of-the-year honours in 1993–94 after guiding Lethbridge to their first-ever appearance in post-season play and an entirely unexpected Canadian university national title with a 34–11–3 overall mark.

Babcock was named head coach of the NHL's Mighty Ducks of Anaheim on May 22, 2002, and through two seasons, guided them to a combined 69–62–19 regular season record (including 14 overtime losses). In the Stanley Cup playoffs with the Ducks, he posted a 15–6 record, leading the Mighty Ducks to the 2003 Stanley Cup Finals, where they lost in seven games to the New Jersey Devils.

Following the 2004–05 NHL lockout, Babcock declined an offer to remain with the Ducks, and on July 15, 2005, was named head coach of the Detroit Red Wings. In his first three seasons, Babcock led the Red Wings to a combined 162–56–28 regular season record and a 28–18 playoff record. He and the Red Wings were eliminated by his former club, the Anaheim Ducks, in the Western Conference Finals of the 2007 playoffs. 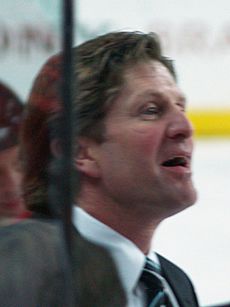 Babcock as head coach of the Detroit Red Wings during the 2007 Stanley Cup playoffs.

In the 2007–08 season, Babcock earned his 200th NHL career win in Detroit's 5–2 victory over the Florida Panthers on December 15, 2007. Heading into the 2008 All-Star Game, as the top team in the NHL, Babcock was selected to coach the Western Conference in the All-Star Game. On June 4, 2008, he led the Red Wings to another Stanley Cup championship by defeating the Pittsburgh Penguins in six games.

Babcock was announced as a finalist for the Jack Adams Award for the 2007–08 season, awarded to the coach who best contributes to his team's success, but ultimately finished third behind Bruce Boudreau of the Washington Capitals and Guy Carbonneau of the Montreal Canadiens.

In June 2008, Babcock signed a three-year contract extension with the Red Wings. In the 2008–09 season, the Red Wings again made the Stanley Cup Final, but lost in seven games to the Pittsburgh Penguins. With the loss in Game 7, Babcock became the first head coach to lose a Stanley Cup Final Game 7 with two different teams.

In the 2011 playoffs, Babcock's Red Wings fell behind the San Jose Sharks three games to none in the second round, but won three-straight to force a Game 7, which the Wings lost 3–2. At this point in his coaching career, Babcock had accumulated an impressive NHL playoff record of 63–39.

In October 2010, Babcock signed a four-year extension with the Red Wings that saw him through to the end of the 2014–15 season.

On April 8, 2014, Babcock earned his 414th career win as head coach of the Red Wings, surpassing Jack Adams as the winningest coach in Red Wings history. Babcock was announced as a finalist for the Jack Adams Award for the 2013–14 season, his second nomination, but finished second in voting behind Patrick Roy of the Colorado Avalanche. On December 6, 2014, Babcock earned his 500th career win as a head coach, becoming the second-fastest coach in NHL history to do so; only Hockey Hall of Famer and former Red Wings coach Scotty Bowman reached the 500-win plateau faster.

After failing to come to terms on a contract extension with the Red Wings, Babcock requested and received permission to seek employment elsewhere on May 8, 2015. The Buffalo Sabres were considered the most serious contenders for Babcock's services, with the St. Louis Blues and San Jose Sharks also being in the mix. However, on May 20, 2015, it was announced that Babcock would become the new head coach of the Toronto Maple Leafs. He reportedly signed an eight-year contract worth $50 million (an average of $6.25 million per season), making him the highest-paid coach in NHL history. Prior to Babcock signing the contract, Todd McLellan of the Edmonton Oilers was the highest-paid coach in the NHL, reportedly earning $3 million per season.

On February 4, 2016, in a game against the New Jersey Devils, Babcock coached his 1,000 NHL game. The Maple Leafs finished last in the entire league during Babcock's first year, compiling a record of 29–42–11 and 69 points. Despite this, praise was given to Babcock's coaching and patience with a team that was expected to do extremely poorly. This season was also the first time Babcock missed the playoffs since the 2004 playoffs when he was with the Mighty Ducks.

The last place finish allowed the Maple Leafs to win the draft lottery, and the number one pick was used to select coveted centre Auston Matthews. The next season was marked by many high-end rookies in Toronto's system, including Matthews, William Nylander, Mitch Marner, Nikita Zaitsev and Connor Brown, among others, making the team to play out the 2016–17 season. Babcock worked closely with these rookies, and their youthful energy and talent, coupled with the addition of goaltender Frederik Andersen, allowed the team to qualify for the playoffs, marking a rare occasion where a team goes from last in the league to capturing a playoff appearance. Toronto faced the top-seeded Washington Capitals in the first round, and though many analyzed the series as lopsided in the Capitals' favour, the Maple Leafs again defied expectations, pushing the Capitals to six games (with five going to overtime, tying an NHL record) before the team was eliminated by the Capitals. Babcock's coaching was praised throughout the playoffs as it was during the regular season, with many lauding his attempts at player development while maintaining a high level of team success. In recognition for these achievements throughout the season, Babcock was nominated for the Jack Adams Award, but once again lost to John Tortorella of the Columbus Blue Jackets.

On November 20, 2019, the Maple Leafs fired Babcock after a six-game losing streak and amidst allegations of a toxic work environment. At the time, the team had a record of 9–10–4 and were outside of the playoffs, despite being projected before the season began to be Stanley Cup contenders. This was the first time in Babcock's professional coaching career that he had been fired.

On February 20, 2021, the University of Saskatchewan announced that Babcock would become the coach of the Men's Hockey Team for two seasons starting May 2021.

All content from Kiddle encyclopedia articles (including the article images and facts) can be freely used under Attribution-ShareAlike license, unless stated otherwise. Cite this article:
Mike Babcock Facts for Kids. Kiddle Encyclopedia.