The milkfish (Chanos chanos) is the sole living species in the family Chanidae. However, there are at least five extinct genera from the Cretaceous.

The species has many common names. The Hawaiian name for the fish is awa, and in Tahitian it is ava. It is called bangús in the Philippines, where it is popularly known as the national fish, although the National Commission for Culture and the Arts has stated that this is not the case as it has no basis in Philippine law. In the Nauruan language, it is referred to as ibiya. Milkfish is also called bandeng or bolu in Indonesia.

Chanos chanos occurs in the Indian Ocean and across the Pacific Ocean, from South Africa to Hawaii and the Marquesas, from California to the Galapagos, north to Japan, south to Australia. Milkfishes commonly live in tropical offshore marine waters around islands and along continental shelves, at depths of 1 to 30 m. They also frequently enter estuaries and rivers.

These fishes generally feed on algae and small invertebrates. They tend to school around coasts and islands with coral reefs. The young fry live at sea for two to three weeks and then migrate during the juvenile stage to mangrove swamps, estuaries, and sometimes lakes, and return to sea to mature sexually and reproduce. Females spawn at night up to 5 million eggs in saline shallow waters. 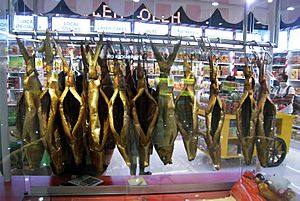 The milkfish is an important seafood in Southeast Asia and some Pacific Islands. Because milkfish is notorious for being much thornier than other food fish, dethorned milkfish, called "boneless bangús" in the Philippines, has become popular in stores and markets. Despite the notoriety however, many people in the Philippines continue to enjoy the fish cooked regularly or even raw using kalamansi juice or vinegar to make kinilaw na bangus.

Popular presentations of milkfish in Indonesia include bandeng duri lunak (ikan bandeng is the Indonesian name for milkfish) from Central and East Java or bandeng presto which is pressure cooked milkfish until the thorns are rendered tender, and bandeng asap or smoked milkfish. Either fresh or processed, milkfish is the popular seafood product of Indonesian fishing towns, such as Juwana near Semarang in Central Java, and Sidoarjo near Surabaya in East Java.

Milkfish is the most popular fish in Taiwanese cuisine, it is valued for its versatility as well as its tender meat and economical price. Popular presentations include as a topping for congee, pan fried, braised, and as fish balls. There is a milkfish museum in Anping District and city of Kaohsiung holds an annual milkfish festival. 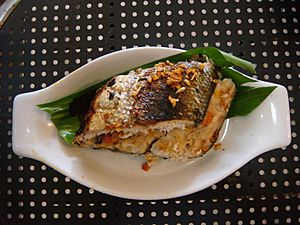 A grilled bangus (milkfish) in the Philippines.

Milkfish aquaculture first occurred around 1800 years ago in the Philippines and spread to Indonesia, Taiwan, and into the Pacific. Traditional milkfish aquaculture relied upon restocking ponds by collecting wild fry. This led to a wide range of variability in quality and quantity between seasons and regions.

In the late 1970s, farmers first successfully spawned breeding fish. However, they were hard to obtain and produced unreliable egg viability. In 1980, the first spontaneous spawning happened in sea cages. These eggs were found to be sufficient to generate a constant supply for farms. 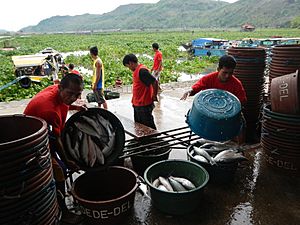 Milkfish aquaculture in fish ponds in Cardona, Rizal, The Philippines.

Fry are raised in either sea cages, large saline ponds (Philippines), or concrete tanks (Indonesia, Taiwan). Milkfish reach sexual maturity at 1.5 kg (3.3 lb), which takes five years in floating sea cages, but eight to 10 years in ponds and tanks. Once they reach 6 kg (13 lb), (eight years), 3–4 million eggs are produced each breeding cycle. This is mainly done using natural environmental cues. However, attempts have been made using gonadotropin-releasing hormone analogue (GnRH-A) to induce spawning. Some still use the traditional wild stock method — capturing wild fry using nets. Milkfish hatcheries, like most hatcheries, contain a variety of cultures, for example, rotifers, green algae, and brine shrimp, as well as the target species. They can either be intensive or semi-intensive. Semi-intensive methods are more profitable at US$6.67 per thousand fry in 1998, compared with $27.40 for intensive methods. However, the experience required by labour for semi-intensive hatcheries is higher than intensive. Milkfish nurseries in Taiwan are highly commercial and have densities of about 2000/L. Indonesia achieves similar densities, but has more backyard-type nurseries. The Philippines has integrated nurseries with grow-out facilities and densities of about 1000/L. The three methods of outgrowing are pond culture, pen culture, and cage culture.

Most food is natural (known as lab-lab) or a combination of phytoplankton and macroalgae. Traditionally, this was made on site; food is now made commercially to order. Harvest occurs when the individuals are 20–40 cm long (250–500 g in weight). Partial harvests remove uniformly sized individuals with seine nets or gill nets. Total harvest removes all individuals and leads to a variety of sizes. Forced harvest happens when an environmental problem occurs, such as depleted oxygen due to algal blooms, and all stock is removed. Possible parasites include nematodes, copepods, protozoa, and helminths. Many of these are treatable with chemicals and antibiotics.

Traditional post-harvest processing include smoking, drying, and fermenting. Bottling, canning, and freezing are of recent origin. Demand has been steadily increasing since 1950. In 2005, 595,000 tonnes were harvested worth US$616 million.

A trend toward value-added products is occurring. In recent years, the possibility of using milkfish juveniles as bait for tuna long-lining has started to be investigated, opening up new markets for fry hatcheries.

On April 21, 2012, a Filipino fisherman donated a milkfish with yellowish coloring to the Philippine Bureau of Fisheries and Aquatic Resources, which was later on called the "golden bangus". However, the fish soon died, allegedly because of a lower level of oxygen in the pond to which it was transferred.

All content from Kiddle encyclopedia articles (including the article images and facts) can be freely used under Attribution-ShareAlike license, unless stated otherwise. Cite this article:
Milkfish Facts for Kids. Kiddle Encyclopedia.