The Mobile–Tensaw River Delta is the largest river delta and wetland in Alabama. It encompasses approximately 260,000 acres (110,000 ha) in a 40-by-10-mile (64 km × 16 km) area and is the second largest delta in the contiguous United States.

The delta's northernmost point is the confluence of the Tombigbee and Alabama rivers and follows a southerly direction that ultimately opens into the head of Mobile Bay through the Mobile, Tensaw, Apalachee, Middle, Blakeley, and Spanish rivers near the Battleship Parkway. It is contained within sections of Baldwin, Clarke, Mobile, Monroe, and Washington counties.

The Mobile–Tensaw delta is ecologically important and includes a wide variety of habitats, including mesic flood plains, cypress-gum swamps, tidal brackish water marshes, bottomland forests and submersed grass beds. As one of the most biologically diverse regions in both Alabama and the United States, it is home to 126 species of fish, 46 mammals, 69 reptiles, 30 amphibians, and at least 300 species of bird, including more than 110 which nest in the region. The delta's considerable biodiversity has led to it being described as an "American Amazon" by naturalist E. O. Wilson.

The delta lies in a river valley which began forming several million years ago. Many separate inland streams joined as they flowed southward across land which was once covered by the Gulf of Mexico. By the end of the last major ice age (approximately 18,000 years ago), when the sea level was much lower and Alabama's coastline was about 60 miles (97 km) south of its present location, the waterways of the delta valley extended much farther than their current-day southern termination at the head of Mobile Bay. As the ice age ended and global temperatures increased, sea levels began to rise again to their present-day level.

Humans inhabited the delta region at least as far back as 5,000 years ago. During the Mississippian periodically time, people of the Pensacola culture built earthen mounds along Bottle Creek and the Tensaw River. During the late prehistoric period, other peoples moved into the area, including the Taensas (Tensaw), the Creek, and the Choctaw. In the 16th century, the area was visited by Spanish forces. French explorers arrived in the last years of the 17th century, eventually settling colonial Mobile in 1702 at Twenty-seven Mile Bluff on the Mobile River. During the Creek War, Red Stick Creeks attacked Fort Mims near the confluence of the Alabama and Tombigbee rivers in August 1813, where they killed most of the mixed-blood Tensaw and Lower Town Creeks, intermarried whites, slaves, and nearly 275 militia.

The schooner Clotilda arrived in the Delta on July 7, 1860, carrying 103 enslaved West Africans captured in Dahomey, and was scuttled to prevent being prosecuted under the Act Prohibiting Importation of Slaves. It was the last slave ship to enter the United States via the Atlantic slave trade. After the Emancipation Proclamation and the Thirteenth Amendment, many of the descendants of the Clotilda would establish the neighborhood of Africatown in Mobile.

The last important battle of the American Civil War took place at the fortified town of Blakeley, located on the edge of the delta.

A railroad line to connect Mobile to Montgomery, now part of the CSX system, opened across the delta in 1872. In the mid-1920s, the Causeway was built across the lowest part of the delta, connecting the western and eastern shores of Mobile Bay. Later, I-65 and I-10 were constructed to span different parts of the area.

The delta was designated a National Natural Landmark in May 1974. 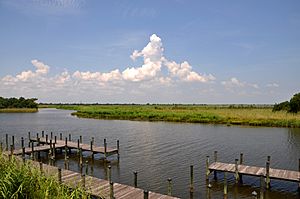 Boating and fishing are popular in the Mobile Delta. Boat ramps and water access points are abundant throughout the area. The Bartram Canoe Trail provides a system of waterways by which boaters may explore the delta. The area is known for its excellent bird watching. Hunting is also a common pastime.

Most of the Delta is very shallow water. To access these areas airboats, canoes, kayaks, or other small craft are typically used.

Delta Safaris at 5 Rivers and Delta Guides and Outfitters are two companies who offer both eco and hunting/fishing excursions in and around the delta.

All content from Kiddle encyclopedia articles (including the article images and facts) can be freely used under Attribution-ShareAlike license, unless stated otherwise. Cite this article:
Mobile–Tensaw River Delta Facts for Kids. Kiddle Encyclopedia.