Mount Conner (also called Atila) is a mountain in central Australia. It is in the southwest corner of the Northern Territory, 75 kilometres (47 mi) southeast of Lake Amadeus. It is 859 metres (2,818 ft) above sea level and 300 metres (984 ft) above the ground around it. The mountain was named by William Gosse in 1873 after South Australian politician Mountifort Longfield Conner. It can be seen from the road towards Uluṟu when coming from Alice Springs.

Mount Conner is a flat-topped inselberg, shaped like a horseshoe. The rock is sedimentary. Its layers were left behind when the area was an inland sea, during the Neoproterozoic era (1Ga to 542Ma).

The rock of Mount Conner is 200 to 300 million years older than the rock of nearby Uluṟu and Kata Tjuṯa. The younger layers of sedimentary rock eroded over millions of years leaving the inselberg that is seen today.

The mountain is known as Atila (also sometimes spelled Artila, Atula, Attila or Artilla) in the native Yankunytjatjara and Pitjantjatjara languages. The country around it is called Atilanya. It is associated with Tjukurpa (Dreaming) stories about the nyiṉya (means "ice people"; commonly spelled "ninya"). The nyiṉya are ancestral spirits who bring cold weather.

For the native Yankunytjatjara people, Mount Conner has long been associated with the Wanambi Dreaming. Wanambi is a ancestral spirit who is said to live in the springs in and around the mountain. Legends relating to this Dreaming were recorded by Charles Mountford when he visited the area in 1940. He wrote that a very dangerous one was said to live in Kapi Atila, a spring that used to exist halfway up the southern slopes. When the spring dried up, the men of Atilanya believed that the wanambi was stolen from them by the people to the south, who placed the spirit in a spring of their own country so that they would have more water.

About 7 km (4.3 mi) southwest of Mount Conner is another water source, a rock hole called Anari (in English, "Aneri Well" or "Mount Conner Well"). Mountford camped there in 1940 on his way to Uluṟu, and recorded the name as "Anneri". He wrote that this was said to be the home of a harmless wanambi that had travelled north to Anari from the Musgrave Ranges. He also wrote about ceremonies relating to the nyiṉya being performed by the women here.

Mountford also recorded another legend associated with the mountain, of a fight between two boys who were hunting in the area. According to the legend, one of the boys discovered the spring at Anari by chance. He refused to tell the other boy where he had found water and, as a result, the second boy nearly died of thirst. They duelled together and slowly made their way to the top of the mountain, where they died. Their bodies are said to be preserved as boulders.

Anari was used as the site of the first homestead of Mount Conner Station. This is now abandoned, and the new homestead is located further north, on the Lasseter Highway. A track leads from here to the base of Mount Conner. 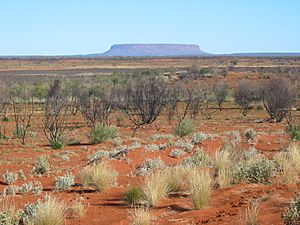 Mount Conner is made up of conglomerates, sandstones, siltstones and mudstones. The summit consists of coarse-grained sandstone with pebble layers and small beds of pebble conglomerate and siltstone. The rock that lies underneath this is composed of dark brown micaceous siltstone, mudstone, and fine-grained sandstone. The lower part of the mountain consists of medium to coarse-grained, grey-brown sandstones, dark-brown siltstones, and cherts. The sides of Mount Conner are also covered by scree (talus) and its top is covered with colluvium. The base of the mountain is surrounded by alluvium.

The summit of Mount Conner, along with the summits of Kata Tjuṯa and Uluṟu, is left over from the erosion of a layer of sediment from the Cretaceous period. It is considered to a classic example of an inselberg created by erosion of surrounding strata.

All content from Kiddle encyclopedia articles (including the article images and facts) can be freely used under Attribution-ShareAlike license, unless stated otherwise. Cite this article:
Mount Conner Facts for Kids. Kiddle Encyclopedia.