Kids Encyclopedia Facts
This page is about the town in Wales. For the similarly named town of Newquay in Cornwall, see Newquay. For other uses, see New Quay (disambiguation).

New Quay (Welsh: Cei Newydd) is a seaside town (and electoral ward) in Ceredigion, Wales, with a resident population of around 1,200 people, reducing to 1,082 at the 2011 census. Located 19 miles (31 km) south-west of Aberystwyth on Cardigan Bay with a harbour and large sandy beaches, it lies on the Ceredigion Coast Path, and remains a popular seaside resort and traditional fishing town. 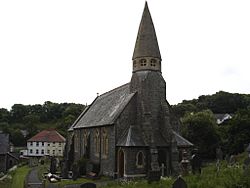 Until the early 19th century, New Quay consisted of a few thatched cottages surrounded by agricultural land, the natural harbour providing a safe mooring for fishing boats and a few small trading vessels. The New Quay Harbour Act was passed in 1834 and a stone pier was constructed at a cost of £4,700. Trading activity increased and new houses were built as economic migrants arrived. Shipbuilding began to take place and the town increased in size with the construction of terraced housing up the slopes of the sheltered bay.

By the 1840s, more than three hundred workmen were being employed in shipbuilding in three centres, New Quay itself, Traethgwyn, a bay just to the north, and Cei-bach, a pebble beach further north below a wooded cliff. Here were constructed not only smacks and schooners for sailing along the coast, but also larger vessels for sailing to the Americas and Australia. At that time, as well as shipwrights, New Quay had half a dozen blacksmith shops, three sail makers, three ropewalks and a foundry. Most of the male inhabitants of the town were mariners or employed in occupations linked with the sea.

By 1870, shipbuilding had ceased at New Quay but most of the men living there still went to sea. There were navigation schools in the town and many of the last square riggers that sailed the world were captained by New Quay men. The observant tourist can still see the old warehouses, now put to new uses, lengths of chain, metal rings and capstans, and a list of tolls for exports and imports can still be seen outside the harbourmaster's office.

There are a number of available publications about the town's history and residents.

New Quay is the name of the electoral ward which is coterminous with the community. Since 1995 the ward has elected one county councillor to Ceredigion County Council. Independent councillor Gill Hopley represented the ward until the May 2017 elections when she was beaten by Independent candidate Dan Potter.

At the local level New Quay is represented by 10 town councillors on New Quay Town Council.

Key attractions for holidaymakers include the picturesque harbour and expansive sandy beach, as well as the ability to see the population of bottlenose dolphins that lives in Cardigan Bay. The town has a heritage centre and marine wildlife centre, as well as the usual collection of shops and restaurants. Nearby New Quay Honey Farm, the largest bee farm in Wales, has a live bee exhibition and sells honey, mead and beeswax. The outskirts of the town feature many large holiday parks and caravan sites.

The annual Cardigan Bay Regatta, usually in August, has been conducted since at least the 1870s. Events now include inshore sports (swimming, rowing, etc.) and dinghy and cruiser racing.

In addition to the hospitality industry, there is still significant employment in sea fishing and fish processing.

As well as shops, restaurants and pubs, New Quay has a large primary school, a doctors' surgery, a small branch of the county library service and a fire station.

New Quay Lifeboat Station, operated by the RNLI, houses two lifeboats: a Mersey class named Frank and Lena Clifford of Stourbridge in dedication to its main benefactors and an inshore inflatable D class. In 2014 the station celebrated 150 years of service, during which period it made 940 callouts.

Public transport is provided by regular bus services to Aberaeron, Cardigan and Aberystwyth. The town has never had a train service, as schemes to open routes to Cardigan or Newcastle Emlyn were abandoned in the 1860s, and that from the Aberaeron to Lampeter branch line (the Lampeter, Aberayron and New Quay Light Railway) was never completed due to the First World War.

A few miles outside New Quay is a honey farm. There is a public park at the top of New Quay next to a tennis court.

Dylan Thomas and his family lived in New Quay from September 4 1944 until July 1945, renting a cliff-top bungalow called Majoda. There were several other families from Swansea living in New Quay, who had come after the bombing of Swansea in 1941. His childhood friend Vera Killick lived next to Majoda, whilst her sister Evelyn Milton lived further along the cliff-top. Thomas also had an aunt and four cousins in New Quay. He had previously visited the town in the 1930s and then again in 1942-43 when he and Caitlin had lived a few miles away at Plas Gelli, Talsarn. His poem Sooner than you can water milk dates from this period, as does his script for the filming of Cardigan Bay for the final part of Wales - Green Mountain, Black Mountain.

One of Thomas' patrons was Thomas Scott-Ellis, 8th Baron Howard de Walden, whose summer residence was Plas Llanina, an historic manor house perched on the cliffs at Cei Bach, next to the tiny church dedicated to St Ina, and just a short walk away from Majoda. He allowed Thomas to use the old apple house at the bottom of the manor's walled garden as a quiet place in which to write. It would have been an inspirational setting, and one Dylan scholar has suggested that the stories about Llanina’s drowned houses and cemetery are “the literal truth that inspired the imaginative and poetic truth” of Under Milk Wood.

New Quay, said Caitlin, was Thomas' kind of place, and he was happy there, as his letters reveal. His ten months at Majoda were the most fertile period of his adult life, a second flowering said his first biographer, Constantine FitzGibbon, “with a great outpouring of poems.” These Majoda poems, including making a start on Fern Hill, provided nearly half the poems of Deaths and Entrances, published in 1946. There were four film scripts as well, and a radio script, Quite Early One Morning, about a walk around New Quay. This radio script has been described as “a veritable storehouse of phrases, rhythms and details later resurrected or modified for Under Milk Wood.” Not since his late teenage years had Thomas written so much. Not surprisingly, his second biographer, Paul Ferris, concluded that “on the grounds of output, the bungalow deserves a plaque of its own.”

New Quay is often cited as an inspiration for the village of Llareggub in Under Milk Wood. Professor Walford Davies, for example, has concluded that New Quay “was crucial in supplementing the gallery of characters Thomas had to hand for writing Under Milk Wood." Fitzgibbon had come to a similar conclusion, noting that “Llareggub resembles New Quay more closely [than Laugharne] and many of the characters derive from that seaside village in Cardiganshire..." Writing in January 1954, just days before the first BBC broadcast of the play, its producer, Douglas Cleverdon, noted that Dylan "wrote the first half within a few months; then his inspiration seemed to fail him when he left New Quay..." And one of Thomas' closest friends, Ivy Williams of Brown's Hotel, Laugharne, has said "Of course, it wasn’t really written in Laugharne at all. It was written in New Quay, most of it."

Llareggub’s occupational profile as a town of seafarers, fishermen, cocklers and farmers has been examined through an analysis of the 1939 War Register, comparing the returns for New Quay with those for Laugharne, Ferryside and Llansteffan. It shows that New Quay and Ferryside provide by far the best fit with Llareggub's occupational profile.

The writer and puppeteer, Walter Wilkinson, visited New Quay in 1947, and his essay on the town captures its character and atmosphere as Thomas would have found it two years earlier. There is, too, a 1959 ITV film of the town and its people during the summer holiday season. 1959 ITV film

Much of the location filming for The Edge of Love, a 2008 film based around Thomas and Caitlin's friendship with Vera Killick, was carried out in and around New Quay. It starred Sienna Miller, Keira Knightley, Matthew Rhys and Cillian Murphy. The film, said the scriptwriter, Sharman Macdonald, was a work of fiction: it was “not true, it's surmise on my part, it's a fiction… I made it up.” One incident in the film that Macdonald did not make up was the shooting at Majoda in March 1945, after which Vera’s husband, William Killick, was charged with attempted murder and later acquitted.

The Dylan Thomas Trail runs through Ceredigion, in west Wales. It was officially opened by Aeronwy Thomas in July 2003. There’s a concise online brochure for the trail, which is marked by blue plaques and information boards in New Quay, Lampeter and Aberaeron. There's also a detailed guide available to help visitors walk the route, as well as describing the poet’s time in the area.

Plas Llanina is considered a good example of a small-scale, post-medieval gentry house. It has a chequered history, including some interesting owners and various stories associated with them. It belonged to the Musgrave family from around 1630. By the end of the 18th century it had passed into the ownership of the Jones family, the last of whom was Edward Warren Jones. When he died, he left the Llanina Estate to his two godchildren, Mrs Charlotte Lloyd (of Coedmore) and her younger brother, Charles Richard Longcroft. The house remained with the Longcrofts until about 1920, its last owner being Air Vice Marshal Sir Charles Alexander Holcombe Longcroft (1883-1958) who had been born and brought up at Llanina. He is considered a founding father of the Royal Air Force.

Sometime in the late 1930s, the house and grounds were rented by Lord Howard de Walden as a summer residence. In the late 1940s, it was bought by Colonel J. J. Davis and Betty Davis, who later moved to Ty Glyn in Ciliau Aeron. By 1964, Plas Llanina was derelict. It was subsequently bought and rebuilt by James Maurice, a City banker.

The house sits next to the church of Saint Ina.

S.C. Passmore (2012) Farmers and Figureheads: the Port of New Quay and its Hinterland, Grosvenor.

All content from Kiddle encyclopedia articles (including the article images and facts) can be freely used under Attribution-ShareAlike license, unless stated otherwise. Cite this article:
New Quay Facts for Kids. Kiddle Encyclopedia.