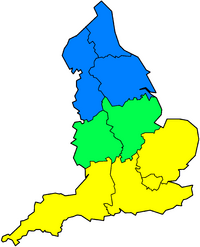 In England, the term North–South divide refers to the cultural and economic differences between

Southern England (the South-East, Greater London, the South-West and parts of the East) and

Northern England (the North-East, Yorkshire and the Humber) and North West England including Merseyside, Greater Manchester.

An article in The Economist (15–21 September 2012) argued that the gap between the north and south in life expectancy, political inclinations and economics trends was growing to the extent that they were almost separate countries.

The North–South divide is not an exact line, but one that can involve many stereotypes, presumptions and other impressions of the surrounding region relative to other regions. The existence of the North–South divide is fiercely contested. Some sources claim that not only does it exist, but that it is expanding. For example, a 'Cambridge Econometrics' report of March 2006 found that economic growth above the UK average was occurring only in the South and South East England, whilst North East England showed the slowest growth. The same data has been interpreted otherwise to indicate only a very small difference. Indeed, results are highly dependent on the categories chosen for evaluation. As a generalisation, the following tend to indicate that there is some sort of north-south divide:

However, when factors such as the cost of living or urban poverty are included, the divisions are sometimes less clear.

Furthermore, many middle class and affluent areas are located near Leeds and Manchester. A report into wealth by Barclays Bank also highlighted the anomaly that the second-wealthiest parliamentary constituency after Kensington and Chelsea is Sheffield Hallam. Yorkshire and Cheshire, geographically part of The North, include prosperous towns and suburbs such as Harrogate, Ilkley and Alwoodley in Yorkshire and Alderley Edge, Wilmslow and Chester in Cheshire. On the other hand, geographically southern areas such as the Isle of Thanet in Kent have struggled with the same industrial decline as parts of the north. Cornwall, many London boroughs such as Hackney and Haringey and southern towns like Luton are other anomalies to the North-South divide with poor health and education.

This has led some commentators to suggest that other divisions, such as class or ethnicity might be more important.

There is also a perceived cultural divide between the north and the south. The It's Grim Up North BBC television series and subsequent book attempted to tease out some of these divisions. Those in the north complained of having fewer cultural opportunities, the book also provided a view of southern life as faceless and bland.

When the commercial broadcaster Granada Television began transmission in 1956, it was primarily based in Manchester. Granada's strapline before both networked and regional programming was originally "From The North, Granada Presents...". A large arrow pointing Upward (North) was part of this caption. Granada Television's 1960s updated arrow (a G with an upwards arrow) was prominent on local idents and production endcaps until Granada's identity was divided between the ITV Granada and Granada Productions (later ITV Studios) brands as part of the creation of ITV plc in 2004.

Counterbalancing the image of the rich South/poor North divide are television programmes like Cold Feet, which feature Yuppie-esque, rich or upper-class Northerners, a deviation from the stereotypical North. Meanwhile, Only Fools and Horses is based around working-class life in Peckham.

During regional television and radio broadcasts, mainly South-Eastern Standard English accents are heard and there are very few regional or typically 'Northern accents', celebrities like comedians Peter Kay and Johnny Vegas both have prominent Northern accents. However this is starting to change, with national stations such as BBC Radio 1Xtra employing northern DJs such as DJ Q, from Huddersfield with a distinctive Northern accent, taking into account the current trend of Black music emerging from the north, such as Bassline House.

Some statistics suggest that the consumption of fast food appears to be higher in 'The North', with the UK's fourteen 'fattest cities' to the north or west of the dividing lines detailed above.

In 2013, two articles in The Economist argued that the divide between the left-leaning North and the right-leaning South could not be explained by economic fortunes alone. For example, the affluent suburban seat of Wirral South was held by Labour, whereas deprived seaside towns in Thanet were represented by the Conservatives. One of the articles compared England's North–South divide to the divide between Northern and Southern Italy. It argued that Italy had a stronger economic divide, whereas England had a stronger divide in voter behaviour. The latter divide has been made starker by the first past the post voting system, which has caused Labour's representation in the South and the Conservatives' representation in the North to both be far weaker than their actual levels of support.

The journalist Kelvin MacKenzie has suggested that the south of England needs a political party to campaign for its interests, including "home rule" for the region. City AM editor Allister Heath had made a similar suggestion in April 2012, and opined that increased powers for the London region might be obtained when the constitutional status of Scotland is debated.

The division is sometimes used for comedy, but has its serious side as well. The London media are sometimes claimed to look down upon those with northern English accents. For example, Ken Livingstone (a Londoner) suggested that the press's unsympathetic treatment of John Prescott was partly because he is one to "speak like ordinary people". 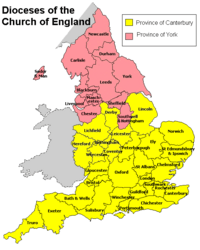 North-South divide between the Provinces of Canterbury and York

Some linguistic research has concluded that many people in the North of England have a dislike of the /ɑː/ vowel in BATH words. AF Gupta wrote, "Many of the northerners were noticeably hostile to /ɡrɑːs/, describing it as 'comical', 'snobbish', 'pompous' or even 'for morons'." On the subject, KM Petyt wrote that several respondents "positively said that they did not prefer the long-vowel form or that they really detested it or even that it was incorrect" Mark Newbrook has assigned this phenomenon the name "conscious rejection", and has cited the BATH vowel as "the main instance of conscious rejection of RP" in his research in the West Wirral.

Industrial decline is most usually given as an explanation for the North-South divide. During the Industrial Revolution, many northern cities underwent a process of intense industrialisation, as raw materials such as coal and iron ore could be found in these areas. This led to comparatively high wealth; Shaw, Greater Manchester reportedly had the highest concentration of millionaires in the country at the time. It also led to over reliance on a few key industries and, as heavy industry began to leave the UK for developing countries under the 'New international division of Labour', these areas declined rapidly. Events like the UK miners' strike (1984–85) polarised public opinion and led to an increase in the divide.

Many Midlands towns and cities appear, at least historically, to have more in common with their northern counterparts than with those in the south. The film Once Upon a Time in the Midlands (2004), starring Ricky Tomlinson, was made very-much in the character of the straight-talking and dry humoured northern comedies.

However, during the 1930s while the North (along with Wales, Scotland and Northern Ireland) suffered badly from the Great Depression, the Midlands shared the fortunes of the South as these two areas of the country both prospered, with a booming Midlands motor car industry matching the Southern growth in manufacture of electrical goods. This not only placed the Midlands socially on the same side as the South during a crucial defining period in Northern working class cultural identity, but also has had still-visible matching effects on the landscape of both Midlands and South - a property boom in the middle years of the decade resulted in the proliferation of the 1930s-style semi-detached houses in Midland areas such as Birmingham's south suburbs to match a similar manifestation in areas of the South such as West London.

Many Northern post-industrial cities and towns are now experiencing renaissance. Examples include Manchester, Kingston upon Hull, Leeds, Liverpool, Newcastle upon Tyne, Sheffield and the Midlands cities of Birmingham, Derby and Nottingham. The Bank of England retain their only offices outside London in Leeds, which also hosts BT and Royal Mail's secondary communication centres for the UK. A strong gaming industry in Leeds has produced global titles such as Grand Theft Auto and L.A. Noire. Some of the world's service industries and banks are also relocating to northern cities, examples include the opening of Bank of New York, Google and RBS offices in Manchester. One can also note the present decentralisation of many BBC departments from London to Salford Quays in Greater Manchester.

Typically Southern upmarket department stores and shops have located new stores in the north; these include Harvey Nichols (opening first in Leeds, then Manchester, followed by Birmingham) and Selfridges in the Trafford Centre in 1998, Manchester in 2002 and Birmingham in 2003. Exclusive shopping destinations such as Leeds' Victoria Quarter have led to the city being dubbed 'The Knightsbridge of the North'. Bradford based supermarket Morrisons, which mainly operated in the North of England acquired 479 stores when it bought Safeway in 2004, the majority of these new supermarkets were in the South of England. Other Northern founded Supermarkets such as Asda, Co-op Food and Marks & Spencer are also popular in the South of England.

Writer and journalist Stuart Maconie argues that "there is no south of England... There's a bottom half of England... but there isn't a south in the same way that there's a north". He goes on to state that "there's no conception of the south comparable to the north. Good or bad, 'the north' means something to all English people wherever they hail from... [to southerns] it means desolation, arctic temperatures, mushy peas, a cultural wasteland with limited shopping opportunities and populated by aggressive trolls. To northerners it means home, truth, beauty, valour, romance, warm and characterful people, real beer and decent chip shops. And in this we are undoubtedly biased, of course". This suggests that all people in England have biased views regarding the North-South divide. Maconie says regarding on where the North starts that "Crewe is surely the gateway to the North", suggesting that Crewe is the most southern part of the North of England.

All content from Kiddle encyclopedia articles (including the article images and facts) can be freely used under Attribution-ShareAlike license, unless stated otherwise. Cite this article:
North–South divide (England) Facts for Kids. Kiddle Encyclopedia.