The nutmeg (Anarta trifolii or Hadula trifolii), also known as the clover cutworm, is a moth of the family Noctuidae.

It is found in the Western Palearctic (western Europe, Tunisia, Iran), Niger, and Quebec in North America. In the north of its European range it is a summer migrant, not being able to survive the cold winters. 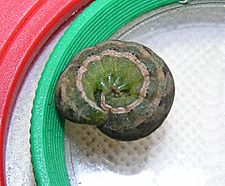 This is a small to medium (wingspan 33–39 mm) species with cryptically coloured forewings, varying from light to dark brown, sometimes with a reddish tinge. The most characteristic feature is a distinctively "W"-shaped, white subterminal line. This feature is seen on some other noctuids, but usually much larger species. The hindwings are grey or buff, darker towards the termen, and marked with dark veins.

One or two broods are produced each year, and adults can be seen at any time from May to September. This species flies at night and is attracted to light as well as to sugar and nectar-rich flowers.

Flight from June to first half of July. Second generation from latter half of July to September.

The larvae feed on a wide range of plants (see list below). The species overwinters as pupae.

All content from Kiddle encyclopedia articles (including the article images and facts) can be freely used under Attribution-ShareAlike license, unless stated otherwise. Cite this article:
Nutmeg (moth) Facts for Kids. Kiddle Encyclopedia.