The olive ridley sea turtle, (Lepidochelys olivacea), also called the Pacific ridley, is one of the smallest species of sea turtle. It is named for the olive-green color of its heart-shaped shell. It is one of seven marine turtles living today. 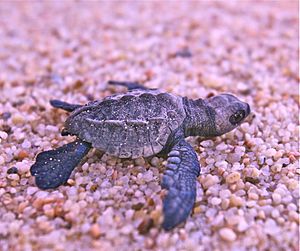 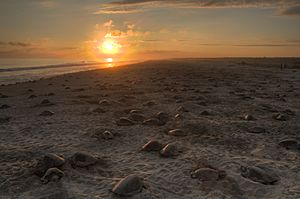 Growing to about 2 feet in length, the olive ridley gets its name from its olive-colored shell, which is heart-shaped and rounded.

Males and females grow to the same size; however, females have a slightly more rounded shell as compared to males.

The head's concave sides are most obvious on the upper part of the short snout.

It has paddle-like fore limbs, each having two anterior claws.

The upper parts are grayish green to olive in color, but sometimes appear reddish due to algae growing on the shell.

Hatchlings are dark gray with a pale yolk scar, but appear all black when wet. Juveniles also have three dorsal keels; the central longitudinal keel gives younger turtles a serrated profile, which remains until sexual maturity is reached.

The olive ridley turtle lives in the tropical and warm waters of the Pacific and Indian Oceans from India, Arabia, Japan, and Micronesia south to southern Africa, Australia, and New Zealand.

In the Atlantic Ocean, it has been observed off the western coast of Africa and the coasts of northern Brazil, Suriname, Guyana, French Guiana, and Venezuela. Additionally, the olive ridley has been recorded in the Caribbean Sea as far north as Puerto Rico. 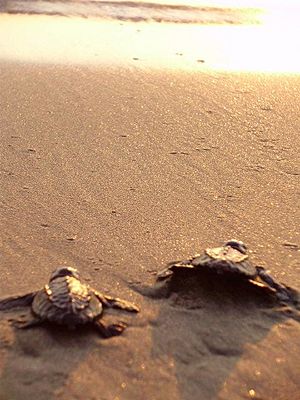 Two olive ridley hatchlings moving into the ocean after being released from a conservation site in Puerto Vallarta, Mexico.

Olive ridleys are occasionally found in open waters. The multiple habitats and geographical localities used by this species vary throughout its lifecycle.

The olive ridley is predominantly carnivorous, especially in immature stages of the lifecycle.

The olive ridley is also known to feed on filamentous algae in areas devoid of other food sources.

Captive studies have indicated some level of cannibalistic behavior in this species. 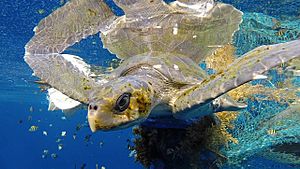 Olive ridley entangled in a ghost net within the Maldives 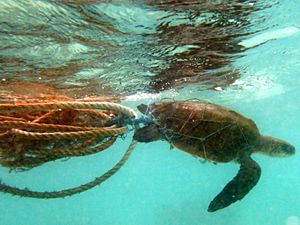 Taken in a drifting net in the Maldives 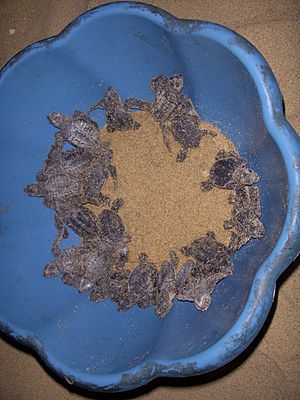 Hatchlings are preyed upon as they travel across the beach to the water by vultures, frigate birds, crabs, raccoons, coyotes, iguanas, and snakes.

In the water, hatchling predators most likely include oceanic fishes, sharks, and crocodiles. Adults have relatively few known predators, other than sharks, and killer whales are responsible for occasional attacks.

On land, nesting females may be attacked by jaguars. 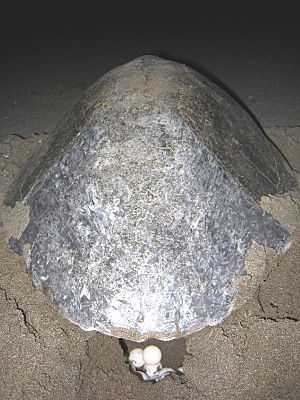 In the past the olive ridley has been exploited for food, bait, oil, leather, and fertilizer.

The meat is not considered a delicacy but the turtle eggs are. Egg collection is illegal in most of the countries where olive ridleys nest, but these laws are rarely enforced. Harvesting eggs has the potential to contribute to local economies, so the unique practice of allowing a sustainable (legal) egg harvest has been attempted in several localities.

All content from Kiddle encyclopedia articles (including the article images and facts) can be freely used under Attribution-ShareAlike license, unless stated otherwise. Cite this article:
Olive ridley sea turtle Facts for Kids. Kiddle Encyclopedia.