Petroleum County is a county in the U.S. state of Montana. As of the 2020 census, the population was 496, making it the least populous county in Montana and the eighth-least populous in the United States. Its county seat is Winnett. The county's area was partitioned from Fergus County to become the last of Montana's 56 counties to be organized.

The area was home to Native American hunter gatherer tribes of the Crow, Blackfoot, Nez Perce, and Sioux. In 1868, a trading post was established at the mouth of this river and was named Musselshell. The county seat, Winnett,was named for Walter John Winnett. He was a Canadian rancher who was captured by Sioux and later adopted into the tribe; he was given the name Eagle Eyes because of his remarkable shooting skills. Winnett established a ranch in Montana Territory in 1879 near an active trading post and the Hangman's Tree used by vigilantes in the area. The massive ranch house, which he built in 1900, housed his own family and served as a gathering place for the community. Winnett built up a freight line business to haul supplies from Billings. In 1910, he built a store and petitioned for a post office—and with that, Winnett became an official town. Fort Magginis was built in 1880 and thereafter, live stock farming proliferated. At that time, gold was also found in Fergus County, which was the original county from which Petroleum County was carved out. During the period from 1911 to 1915, stakes in the county were claimed by an influx of settlers with claims limited to 320 acres (130 ha) of land to each settler and squatter. However, in 1930 many of these lands reverted to the Government as settlers deserted the town. 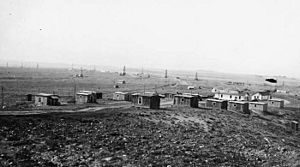 Oil was discovered at the Cat Creek Oil Field on February 18, 1920, at the southeast corner of the county. Petroleum found in the Cat Creek was of high grade and extraction of crude oil started soon. In 1922, the crude oil extracted was 2.2 million barrels.

The county got its present name, "Petroleum County", from its status as the site of the first major oil discovery in Montana. When the state government established Petroleum County in 1925, splitting it from Fergus County, Winnett became the county seat and the county was named after the emerging petroleum industry of Cat Creek. 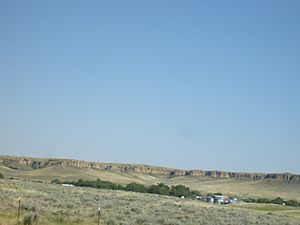 Winnett Rims from the Highway

The county’s eastern boundary is formed by the Musselshell River. According to the U.S. Census Bureau, the county has a total area of 1,674 square miles (4,340 km2), of which 1,655 square miles (4,290 km2) is land and 19 square miles (49 km2) (1.1%) is water. Its land topography lies in an elevation range of 2,250–4,000 feet (690–1,220 m). The land lies in the Missouri Plateau section of the Great Plains. The uplands are generally of fairly level land and valleys while the general topography is of rolling hills and valleys except for sharp gullies on the side slopes of Missouri and Musselshell Rivers in certain stretches. The southern part of the county also consists of moderate hill slopes and gentle valleys, interspersed with steep cliffs in some stretches.

Petroleum County is bordered to the north by Phillips County, Garfield County to the east, Rosebud County to the southeast, Musselshell County to the south, and Fergus County to the west. Notable towns in the county include Winnett, Cat Creek, Flatwillow, Kelley, and Teigen. State Highway 200 passes through the middle of county, State Highway 244 from the east end is from Winnet to the county, U.S. Route 87 passes through the southwest corner of the county. There is also a network of internal roads that connect to various places in the county. A Tyrannosauridae fossil skeleton was discovered in the Judith River Formation, while Alamosaurus was discovered in the Hell Creek Formation.

Rivers running through the county include the Missouri River and Musselshell River. The Musselshell River is drained mostly by its tributaries within the county. However, the northern tributaries drain into the Missouri River and eventually into the Fort Peck Reservoir. The creeks which flow through the county are all ephemeral in nature, flowing only during the rainy season, while the larger creeks have formed flood plains which are composed mainly of silt, clay and to some extent sand and pebbles. There are several creeks, including Bender Creek, Bear Creek, and the other creeks are the Flat Willow Creek, Bender Creek, Box Elder Creek, Brickyard Creek, Buffalo Creek, Cat Creek, Cottonwood Creek, Sacagawea River, and Dovetail Creek. Wild Horse Lake is located in the county formed in a natural depression. Some of the important lakes and reservoirs in the county are: Little Bear Lake, Wild Horse Lake, War Horse Lake, Petrolia Lake, War Horse Lake, Yellow Water Reservoir and Headman-Field Reservoir. Only the northern part of the county is rich in surface water resources, but there is hardly any agricultural land to use it. In the rest of the county, the reliance for agricultural use is on ground water. 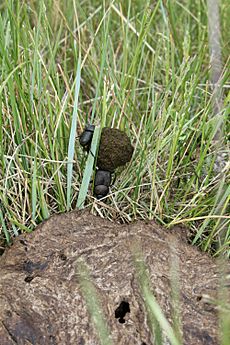 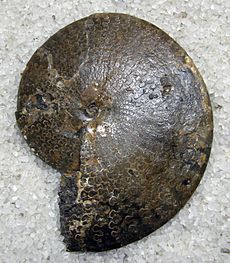 A sandstone ridge with steep dips passes through the county starting from the Musselshell River in the northern end running up to the boundary on the west end of the county. This geological feature, an anticline, is petroleum-bearing. The anticline divides the county into two geological regions - one is to the north of the anticline with geological formations of Bearpaw Shale or the Hill Creek Formation while the other region, to the south of the anticline, is of formations containing older Cretaceous rocks. Marine shales (generally in dark gray turning to black color), classified under the geological formations of the Colorado Group, are found as outcrops throughout the county and these are of Cretaceous age. Sandstones are also noted in alternate sequences and these are identified at deeper depths in Cat Creek. Of the anticlines noted in the area, the Cat Creek Anticline, which runs in an east–west direction is dominant.

The wild life found in the country are elk, white-tailed deer, mule deer and pronghorn antelope. These provide for good hunting opportunities. The pheasant population has been increasing in the county, eagles frequent War Horse Lake, and Gray, or Hungarian, partridge are an introduced species. 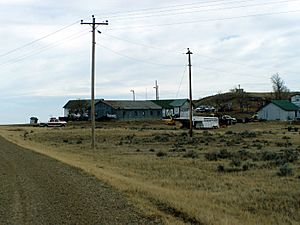 As of March 2012, the cost of living index in the county was 82.255 below the national average of 100. Petroleum and cattle raising are the principal economic activities; livestock farming accounts for 89.7% of the farm income. Crude oil from the Cat Creek and Rattlesnake Butte fields is piped to refineries in Billings. Agriculture, forestry, fishing and hunting are attributed to 66% of the population. 58.2% of people in the county are employed in mining. Another 15.5% are employed in educational, health and social services. Some of the notable ranches in the county are: McArthur Ranch, Maxwell Ranch, Crooked Creek Campground, Fail Ranch, and Novak Homestead. As of 2012, the average size of farms was 6,045 acres and the area under all harvested wheat grain was 14,720 acres (5,960 ha). The major crops grown in the county are wheat (both winter wheat and spring wheat) and barley. Alfalfa and grass hay are grown as cattle feed under irrigated conditions along the main river course and also on the banks of creeks such as Flat Willow, Box Elder, and Macdonald.

All content from Kiddle encyclopedia articles (including the article images and facts) can be freely used under Attribution-ShareAlike license, unless stated otherwise. Cite this article:
Petroleum County, Montana Facts for Kids. Kiddle Encyclopedia.