Scandinavia is a group of countries in northern Europe, that includes Norway and Sweden. The term is most often used linguistically, to mean places that speak Scandinavian languages (also called the North Germanic languages). Then it also includes Denmark. The Scandinavian languages (Swedish, Norwegian, Danish, Icelandic and Faroese) are closely related, and many Scandinavians are able to understand some of the other languages, with some difficulty. Sometimes "Scandinavia" is a term of physical geography in which case it includes Finland instead.

The Scandinavian Peninsula is a large peninsula reaching west from northern Europe over the north side of the Baltic Sea. Norway, Sweden and some of Finland are on the peninsula, also known as Fennoscandia. Denmark, not Finland, however, is regarded as part of Scandinavia. This is because Danish is a Scandinavian language but Finnish is not.

The term Nordic countries is sometimes used as a more correct geographical term, but the Nordic countries include Norway, Sweden, Denmark (including the Faroe Islands), Finland and Iceland. These five countries coordinate political and cultural activities through the Nordic Council. Denmark, Sweden and Finland are also members of the European Union, but only Finland uses the euro, while the other Nordic countries still use their own currency, each called krone or krona ("crowns"). Norway and Iceland, which are not members of the EU, are members of NATO. Only Denmark is a member of both the EU and NATO.

The Scandinavian Peninsula is sparsely populated and covered with large forests of pine, birch, and spruce. The western and northern parts are mountainous; the Scandinavian mountains are some of the oldest in the world. The tallest mountain is Galdhøpiggen in Norway. Denmark (43,098 km2) is the smallest of the Scandinavian countries. It is more densely populated, and most of the land is farmland. Sweden (449,964 km2) is the largest of the Scandinavian countries. It has the most lakes, and the landscape ranges from plains in the south to mountains in the west (along the border with Norway) to tundra in the north. The far north of Scandinavia and Finland is called Lapland, where the Sami people live. Some of them still herd reindeer as they have for centuries, but the Sami mostly live in a modernised society equal to that of other Scandinavians.

The best-known stereotypes of Scandinavian people relate to the Vikings of the Middle Ages. The Vikings from Sweden are best known as traders, traveling as far as what we now know as Ukraine and starting trade routes to bring goods from the Middle East to Scandinavia. The Vikings from Norway are best known as explorers, crossing the North Atlantic in their longships and settling Iceland and Greenland. The Norwegian explorers even reached the east coast of what we now call Canada, where they set up a colony, but it only lasted a few years. The Vikings from Denmark, however, left the biggest mark on the English. The Danish raiders attacked England repeatedly and brutally, demanding payment that came to be called "Danegeld" (Danish gold) and making the priests and bishops of churches along the eastern coast England say and write down the famous prayer, "deliver us, O Lord, from the wrath of the Norsemen!" But the modern stereotypes of the Vikings actually were invented much later, in the 19th century, when Richard Wagner and other people of the Romantic period (1800s) invented descriptions of ancient Germanic culture in the opera and the other arts, often showing Vikings wearing furs and winged or horned helmets and drinking from large horns. 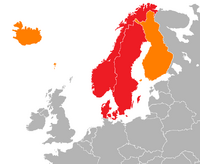 The most common usage: the three monarchies Denmark, Norway and Sweden      An extended usage, including Finland, Svalbard, Iceland, Greenland and the Faroe Islands

All content from Kiddle encyclopedia articles (including the article images and facts) can be freely used under Attribution-ShareAlike license, unless stated otherwise. Cite this article:
Scandinavia Facts for Kids. Kiddle Encyclopedia.