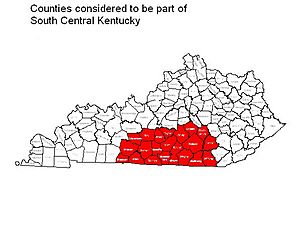 South Central Kentucky is a cultural region of 22 Kentucky counties located roughly between I-65 in the Bowling Green area and I-75 around the London area, but within three counties of the Tennessee border and south of the "Golden Triangle" (the areas around Louisville, Lexington, and Northern Kentucky). In 2005, South Central Kentucky had an estimated population of 562,883, an increase of 25,262 over the 2000 total. By 2010, it is projected to have a population of 588,145; an increase of 8.6% over its 2000 population of 537,621.

The region is basically defined as being more culturally southern than the triangle, but less isolated from the state's major urban areas than Eastern or Western Kentucky. It is also the only part of Kentucky outside the Golden Triangle to be experiencing large population growth, with 11 of its 22 counties growing from 2.4% to 6.2% between 2000 and 2004. Only three Kentucky counties outside either the Golden Triangle or S.C. grew by more than 2.4% during that four-year period. The area is also home to five of Kentucky's largest lakes, making the area a popular resort and retirement area.

All content from Kiddle encyclopedia articles (including the article images and facts) can be freely used under Attribution-ShareAlike license, unless stated otherwise. Cite this article:
South Central Kentucky Facts for Kids. Kiddle Encyclopedia.