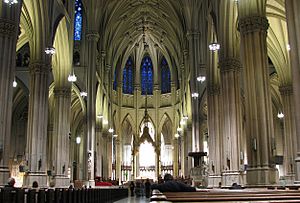 Saint Patrick's Cathedral is a decorated Neo-Gothic-style Catholic cathedral church in the United States. It is the seat of the archbishop of the Roman Catholic Archdiocese of New York, and a parish church, located on the east side of Fifth Avenue between 50th and 51st Streets in midtown Manhattan, New York City, New York. It faces Rockefeller Center.

All content from Kiddle encyclopedia articles (including the article images and facts) can be freely used under Attribution-ShareAlike license, unless stated otherwise. Cite this article:
St. Patrick's Cathedral (New York) Facts for Kids. Kiddle Encyclopedia.