States of Malaysia facts for kids 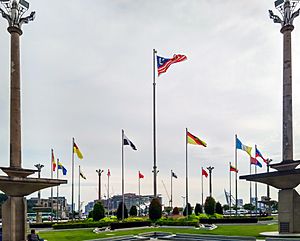 All Malaysia and its states' flags at Putra Square, Putrajaya, Malaysia.

The states and federal territories

The 13 states are based on historical Malay Kingdoms, and 9 of the 13 states, known as the Malay States, retain their royal families. The Federal King (titled Yang di-Pertuan Agong) is elected (de facto rotated) among the nine rulers to serve a 5-year term. The nine Malay States have a hereditary Ruler as titular Head of state and an executive Chief Minister or Menteri Besar as politically responsible Head of government. The rulers of Johor, Kedah, Kelantan, Pahang, Perak, Selangor and Terengganu are styled Sultans (typically Islamic). Only Negeri Sembilan's elective ruler holds the rare, autochthonous Malay title of Yang di-Pertuan Besar, whereas only the Ruler of Perlis is titled Raja. Former British settlements and crown colonies of Penang and Malacca (both peninsular) and Sabah and Sarawak (both on Borneo) each have a federally appointed titular Governor (styled Yang di-Pertua Negeri) and an executive Chief Minister or Ketua Menteri.

Sabah and Sarawak have additional powers as part of the terms when they joined Malaysia, such as immigration controls. They have separate immigration policies and controls and a unique residency status. Passports are required even for Malaysians for travelling between these two states or between either state and Peninsular Malaysia, however Peninsular Malaysians who are on social/business visits up to three months are allowed to produce a MyKad or birth certificate and fill in a special form in lieu of a passport.

Each state has a unicameral legislature called Dewan Undangan Negeri (DUN, State Assembly). Members of DUN are elected from single-member constituencies drawn based on the population. The state leader of the majority party in DUN is usually appointed Chief Minister by the Ruler or Governor. The term of DUN members is five years unless the assembly is dissolved earlier by the Ruler or Governor on the advise of the Chief Minister. Usually, DUN of the states in Peninsular Malaysia are dissolved in conjunction with the dissolution of the federal parliament, in order to have state elections running concurrently with the parliamentary election. However, Rulers and Governors hold discretionary powers in dissolving the DUN.Each state sends two representatives to the Dewan Negara (Senate), the upper house of the federal parliament.

The Parliament of Malaysia is permitted to legislate on issues of land, Islamic religion and local government in order to provide for a uniform law between different states, or on the request of the state assembly concerned. The law in question must also be passed by the state assembly as well, except in the case of certain land law-related subjects. Non-Islamic issues that fall under the purview of the state may also be legislated on at the federal level for the purpose of conforming with Malaysian treaty obligations. Each state is further divided into districts, which are then divided into mukim. In Sabah and Sarawak districts are grouped into "Divisions".

Singapore was a Malaysian state from the formation of Malaysia on 16 September 1963 until it was expelled from the Federation on 9 August 1965.

Brunei was invited to join the Federation but decided not to at the end due to several issues, such as the status of the Sultan within Malaysia, division of Bruneian oil royalties, and pressure from opposition groups which amounted to the Brunei Revolt.

All content from Kiddle encyclopedia articles (including the article images and facts) can be freely used under Attribution-ShareAlike license, unless stated otherwise. Cite this article:
States of Malaysia Facts for Kids. Kiddle Encyclopedia.