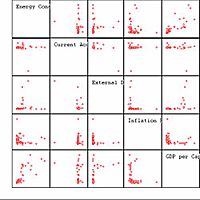 Scatter plots are used in descriptive statistics to show the observed relationships between different variables.

Statistics is the science of data. It enables the collection, analysis, understanding, and presentation of data. It helps in the study of many other fields, such as medicine, economics, psychology, and marketing. Someone who works in statistics is called a statistician.

Statistics provides ways to get the data needed for a study without waste, such as surveys and controlled experiments. Once the data has been collected, there are two basic ways that data can be analysed:

Statistics have been in use for a long time. The first known statistics are census data. The Babylonians did a census around 3500BC, the Egyptians around 2500 BC, and the Ancient Chinese around 1000 BC.

Before we can describe the world with statistics, we must collect data. The data that we collect in statistics are called measurements. After we collect data, we use one or more numbers to describe each observation or measurement. For example, suppose we want to find out how popular a certain TV show is. We can pick a group of people (called a sample) out of the total population of viewers. Then we ask each one how often they watch the show, or (better) we measure it by attaching a counter to each of their television sets. For another example, if we want to know whether a certain drug can help lower blood pressure, we could give the drug to people for some time and measure their blood pressure before and after.

Most often we collect statistical data by doing surveys or experiments. To do a survey, we pick a small number of people and ask them questions. Then, we use their answers as the data.

The choice of which individuals to take for a survey or data collection is important, as it directly influences the statistics. When the statistics are done, it can no longer be determined which individuals are taken. Suppose we want to measure the water quality of a big lake. If we take samples next to the waste drain, we will get different results than if the samples are taken in a far away, hard to reach, spot of the lake.

There are two kinds of problems which are commonly found when taking samples:

We can reduce chance errors by taking a larger sample, and we can avoid some bias by choosing randomly. However, sometimes large random samples are hard to take. And bias can happen if different people are not asked, or refuse to answer our questions, or if they know they are getting a fake treatment. These problems can be hard to fix. See also standard error.

Finding the middle of the data

The middle of the data is called an average. The average tells us about a typical individual in the population. There are three kinds of average that are often used: the mean, the median and the mode.

The examples below use this sample data:

The formula for the mean is

are the data and

This means that you add up all the values, and then divide by the number of values.

The problem with the mean is that it does not tell anything about how the values are distributed. Values that are very large or very small change the mean a lot. In statistics, these extreme values might be errors of measurement, but sometimes the population really does contain these values. For example, if in a room there are 10 people who make $10/day and 1 who makes $1,000,000/day. The mean of the data is $90,918/day. Even though it is the average amount, the mean in this case is not the amount any single person makes, and is probably useless.

The mode is the most frequent item of data. For example the most common letter in English is the letter "e". We would say that "e" is the mode of the distribution of the letters.

The mode is the only form of average that can be used for data that can not be put in order.

Finding the spread of the data

We also can use statistics to find out that some percent, percentile, number, or fraction of people or things in a group do something or fit in a certain category.

For example, social scientists used statistics to find out that 49% of people in the world are males.

All content from Kiddle encyclopedia articles (including the article images and facts) can be freely used under Attribution-ShareAlike license, unless stated otherwise. Cite this article:
Statistics Facts for Kids. Kiddle Encyclopedia.