Strong is a town in Franklin County, Maine, United States. The population was 1,122 at the 2020 census. Strong is home to the annual Sandy River Festival. 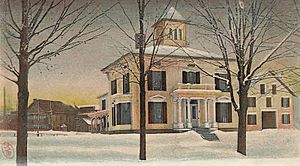 The plantation was called Township No. 3, First Range North of Plymouth Claim, West of Kennebec River (or T3 R1 NPC WKR), then successively known as Middletown and Readstown. It was first settled in 1784 by William Read from Nobleboro. Readstown was incorporated on January 31, 1801 and named for Caleb Strong, governor of Massachusetts. The Maine Republican Party was founded here on August 7, 1854.

Set on a hilly intervale above a big bend in the Sandy River, the area provided fertile soil for agriculture. Farmers grew hay, wheat, corn, oats and potatoes. The northeast branch of the Sandy River provided water power for mills, helping make Strong prosperous. By 1859, when the population was 1,008, it had sawmills, a gristmill, a fulling mill, a carding machine, a starch factory and a tannery.

The narrow gauge Sandy River Railroad connected Farmington and Phillips in 1879. By 1886, town industries included a boot and shoe factory, machine shops, a cheese factory, a clothespin manufacturer, a maker of cane seat chair bottoms, and an excelsior factory. It was noted as "one of the prettiest villages in the county."

Strong was called "Toothpick Capital of the World" due to the productivity of the Strong Wood Products Incorporated plant, which once manufactured 20 million toothpicks per day.

The town borders the towns of New Vineyard to the east, Farmington to the south, and Temple and Avon to the west, and Freeman Township to the north.

There were 496 households, of which 30.8% had children under the age of 18 living with them, 54.0% were married couples living together, 9.5% had a female householder with no husband present, 4.8% had a male householder with no wife present, and 31.7% were non-families. 23.2% of all households were made up of individuals, and 11.3% had someone living alone who was 65 years of age or older. The average household size was 2.45 and the average family size was 2.85.

All content from Kiddle encyclopedia articles (including the article images and facts) can be freely used under Attribution-ShareAlike license, unless stated otherwise. Cite this article:
Strong, Maine Facts for Kids. Kiddle Encyclopedia.