The Tannersville Cranberry Bog or Cranberry Swamp is a sphagnum bog on the Cranberry Creek in Tannersville, Pennsylvania. It is the southernmost boreal bog east of the Mississippi River, containing many black spruce and tamarack trees at the southern limit of their ranges. Technically, it can be classed as an acid fen, as it receives some groundwater flow. The site was designated a National Natural Landmark in December 1974. It was purchased by The Nature Conservancy and the Conservation and Research Foundation in 1957. Like many bogs, its terrain presents an image of solidity, but a liquid mass of decaying peat lies beneath a six-inch (152 mm) layer of sphagnum and a network of supporting tree roots. However, this bog may be viewed from a floating walkway. 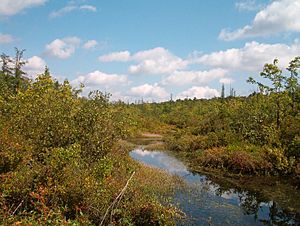 The bog began as a "kettle lake" formed approximately 10,000 years ago by a portion of the retreating Wisconsin Glacier (named according to geologic epoch, not location), which initially covered a depth up to the top of the current forest canopy. With restricted air and nutrient flow, sphagnum moss grew out into the lake, eventually forming a layer of peat over 40 feet (12 m) thick. While young bogs may contain an "eye" of open water where sphagnum has not yet reached, no such feature remains in the Tannersville Cranberry Bog. However, a narrow strip of open water marks the course of the Cranberry Creek, where the water is less acidic. 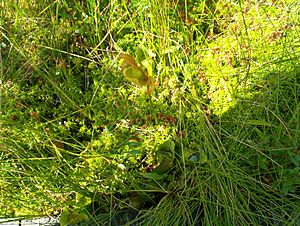 The call for preservation of this habitat began with William A. Niering, who as a child visited the bog as the nephew of its owner and was moved ultimately to become a widely recognized authority on bog ecology. The practical benefits of the bog were evident during the Flood of 1955, when bridges downstream of the bog were spared from the massive damage done in much of the Poconos. In 1956 The Nature Conservancy acquired the first 62.5 acres (253,000 m2) for protection. The area held by this organization has increased by gifts and purchases to over 1,000 acres (4.0 km2), and adjoins on additional public lands.

Initially, public visitation to the land was not permitted. However, in the 1980s the Monroe County Conservation District negotiated access to the bog for purposes of public education. A floating boardwalk was constructed and expanded to 1,450 feet (440 m) in 1993, which consists of treated lumber supported by floating barrels. Planks are now replaced as needed with a recycled plastic product.

All content from Kiddle encyclopedia articles (including the article images and facts) can be freely used under Attribution-ShareAlike license, unless stated otherwise. Cite this article:
Tannersville Cranberry Bog Facts for Kids. Kiddle Encyclopedia.