Twenty-seventh Amendment to the United States Constitution facts for kids

Congress is made of two "Houses," and the members of each House serve different terms (amounts of time in office). Members of the United States Senate serve six-year terms, and members of the United States House of Representatives serve two years each. The Twenty-seventh Amendment says that no law can change Congresspeople's salaries until a new two-year term for Representatives starts.

As of 2020, the Twenty-seventh amendment is the last amendment that has been added to the Constitution. It took longer for the states to ratify this amendment than any other in history. The 1st United States Congress sent the suggested amendment to the states for their approval on September 25, 1789. It was not until May 7, 1992, that enough states ratified the amendment for it to be added to the Constitution. The ratification process had taken 202 years, 7 months, and 12 days – the longest in United States history.

When Congress first proposed the amendment in 1789, this is the text they suggested:

No law, varying the compensation for the services of the Senators and Representatives, shall take effect, until an election of Representatives shall have intervened.

On September 25, 1789, the first United States Congress gave a group of 12 amendments to the states for their approval. Written by James Madison, these were the first 12 Constitutional amendments ever written. One of them was an amendment about salaries for Members of Congress. Madison wanted to protect against Congresspeople being able to give themselves raises whenever they wanted to, while they were in the middle of their terms and the people could not vote them out.

In 1791, the states ratified ten of the 12 suggested amendments. These ten amendments became the Bill of Rights. However, the states did not ratify the other two amendments out of the 12 – including the one on limiting pay for Congresspeople. 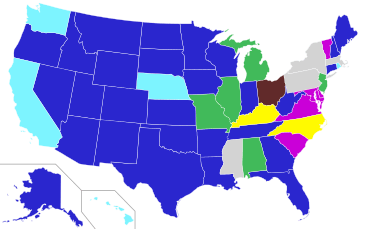 Now a committee of House and Senate members had to meet to figure out a compromise and come up with amendments that they could all agree on. After three days, they had come up with 12 suggested amendments, which they brought back to the full House and Senate. That same day – September 24, 1789 – the House agreed on the 12 proposed amendments. The next day, the Senate agreed too. The 12 amendments included the one on Congressional pay.

Ratification by the states

On December 15, 1791, the states ratified ten of the twelve suggested amendments. These got added to the Constitution together as the Bill of Rights. However, at this time, only six states had ratified the Congressional pay amendment.

Over the next 186 years, only two more states ratified the Amendment. Meanwhile, many more states joined the United States. This meant that a larger number of states would need to ratify the amendment to get it added to the Constitution, since three-fourths of the state legislatures needed to ratify it, and there were more and more states as time went on.

All content from Kiddle encyclopedia articles (including the article images and facts) can be freely used under Attribution-ShareAlike license, unless stated otherwise. Cite this article:
Twenty-seventh Amendment to the United States Constitution Facts for Kids. Kiddle Encyclopedia.