Pitchblende is a radioactive, uranium-rich mineral and ore. It has a chemical composition that is largely UO2, but also contains UO3 and oxides of lead, thorium, and rare earth elements. It is known as pitchblende due to its black color and high density. It is also commonly referred to as Uraninite. The mineral has been known at least since the 15th century from silver mines in the Ore Mountains, on the German/Czech border. Pitchblende found in Germany was used by M. Klaproth in 1789 to discover the element uranium. 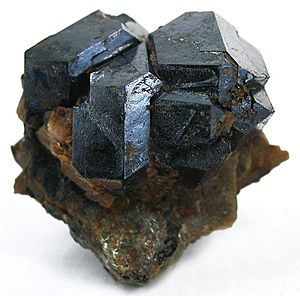 Pitchblende is a major ore of uranium. Some of the highest grade uranium ores in the world were found in the Shinkolobwe mine in the Democratic Republic of the Congo (the initial source for the Manhattan Project) and in the Athabasca Basin in northern Canada. Another important source of pitchblende is at Great Bear Lake in the Northwest Territories of Canada, where it is found in large quantities associated with silver. It also occurs in Australia, Germany, England, and South Africa. In the United States it can be found in the states of New Hampshire, Connecticut, North Carolina, Wyoming, Colorado, Arizona and New Mexico.

Uranium ore is generally processed close to the mine into yellowcake, which is an intermediate step in the processing of uranium.

All content from Kiddle encyclopedia articles (including the article images and facts) can be freely used under Attribution-ShareAlike license, unless stated otherwise. Cite this article:
Pitchblende Facts for Kids. Kiddle Encyclopedia.