Victoria Claflin Woodhull, later Victoria Woodhull Martin (September 23, 1838 – June 9, 1927) was an American leader of the women's suffrage movement. She was the first woman candidate for President of the United States,

In 1872, Woodhull ran for President of the United States. While many historians and authors agree that Woodhull was the first woman to run for President of the United States, some have questioned that priority given issues with the legality of her run. They disagree with classifying it as a true candidacy because she was younger than the constitutionally mandated age of 35. However, election coverage by contemporary newspapers does not suggest age was a significant issue. The presidential inauguration was in March 1873. Woodhull's 35th birthday was in September 1873.

Woodhull twice went from rags to riches. Woodhall was married three times. During her third marraige, she changed her name to Victoria Woodhull Martin. 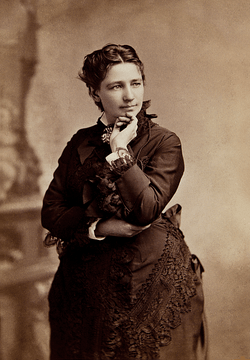 Victoria Woodhull during the 1860s

In March 2017, Amazon Studios announced production of a movie based on her life, produced by and starring Brie Larson as Victoria Woodhull.

All content from Kiddle encyclopedia articles (including the article images and facts) can be freely used under Attribution-ShareAlike license, unless stated otherwise. Cite this article:
Victoria Woodhull Facts for Kids. Kiddle Encyclopedia.