Waterbury is a town in Washington County in central Vermont, United States. It is also the name of a village within that town. As of the 2020 census, the population was 5,331.

The location where Waterbury now lies was once the frontier between the Mahican and Pennacook people. European settlement of the area dates from 1763, when King George III granted a charter for land in the Winooski River valley. James Marsh became the first permanent white settler in the region in 1783. Many of the early settlers came from Waterbury, Connecticut, and named their new town in honor of the hometown. The village of Waterbury was incorporated in 1882 with a population of over 2,000.

The Central Vermont Railroad came to Waterbury in 1849. The railroad expanded a passenger station for the railroad in 1875, making the station a more major stop on the Vermonter. The Green Mountain Seminary was built in Waterbury Center in 1869.

The state opened the Vermont State Asylum for the Insane here in 1891. The hospital, renamed the Vermont State Hospital, grew to occupy over 40 buildings, but by the 1980s the number of patients had declined to the point where only one building was required. The remainder of the campus came to be used for state offices.

Like many New England towns, Waterbury's economy was based around the local river mill industry and the surrounding agricultural producers. The mills produced products such as lumber and finished wood products, wicker products, leather, starch, and alcohol. The agriculture was based on sheep through the 19th century but switched over to dairy farming by the 20th century. Waterbury had a ski factory in the 1940s, the Derby & Ball Company.

In 1927, Waterbury, like many other Vermont communities, was devastated by flooding. Inscriptions on the sides of some buildings in Waterbury village purport to show where the level of the water rose during the 1927 flood. The village recovered, and in 1938 the Waterbury Dam was built on the Little River by the Army Corps of Engineers to control future flooding in areas downstream of the town center.

On August 29, 2011, Tropical Storm Irene flooded downtown Waterbury and filled the buildings of the Vermont State Hospital, Vermont's public psychiatric complex, with up to 6 feet (1.8 m) of water. Patients from the mental hospital were temporarily housed in various locations around Vermont, and over 1,100 of the 1,586 state employees were working in office space in other towns as of October 2011. The state was expected to decide by 2012 whether to relocate all or part of the workforce back to Waterbury.

There were 2,011 households, out of which 24.0% had children under the age of 18 living with them, 54.2% were married couples living together, 7.9% had a female householder with no husband present, and 34.3% were non-families. 25.6% of all households were made up of individuals, and 9.5% had someone living alone who was 65 years of age or older. The average household size was 2.42 and the average family size was 2.93.

This climatic region is typified by large seasonal temperature differences, with warm to hot (and often humid) summers that are known to occasionally reach 90 to 100 degrees and cold (sometimes severely cold) winters. According to the Köppen Climate Classification system, Waterbury has a humid continental climate, abbreviated "Dfb" on climate maps. 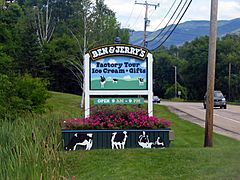 Waterbury is the location of Ben & Jerry's Ice Cream, whose factory tours have become Vermont's most popular tourist attraction.

Other local businesses include: SunCommon, Hen of the Wood Restaurant, Cabot Creamery Annex, the Alchemist microbrewery, Cold Hollow Cider Mill, Green Mountain Coffee Roasters, and Lake Champlain Chocolates, as well as several well-reputed bars and restaurants. Businesses in the town, which sits between several major mountains including Mount Mansfield, typically thrive during the month of October, when tourism swells thanks to fall foliage.

All content from Kiddle encyclopedia articles (including the article images and facts) can be freely used under Attribution-ShareAlike license, unless stated otherwise. Cite this article:
Waterbury, Vermont Facts for Kids. Kiddle Encyclopedia.