Whaley Bridge is a small town and civil parish in the High Peak district of Derbyshire, England, situated on the River Goyt. Whaley Bridge is approximately 16 miles (26 km) south of Manchester, 7 miles (11 km) north of Buxton, 9 miles (14 km) east of Macclesfield and 28 miles (45 km) west of Sheffield, and had a population of 6,455 at the 2011 census. This includes the village of Furness Vale, which falls within the boundaries of Whaley Bridge. Other districts of 'Whaley', as it is known locally, include Horwich End , Bridgemont , Fernilee Stoneheads and Taxal. 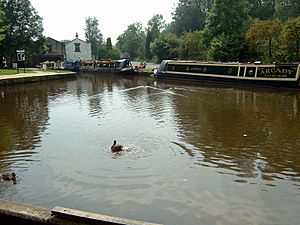 The canal basin in Whaley Bridge on a summer's day

There is evidence of prehistoric activity in the area, including early Bronze Age standing stones, burial sites and the remains of a stone circle. A bronze-age axe head was discovered in 2005. There has long been speculation that the 'Roosdyche', a complex of banks and ditches on the eastern side of the town, is of prehistoric human origin, but investigations in 1962 concluded that it was formed by glacial meltwater.

The name of Weyley or Weylegh appears in many 13th century documents and is derived from the Anglo Saxon weg leah meaning a clearing by the road. In 1351 the lands of Weyley and Yeardsley were granted to William Joddrell for his faithful service to Edward, the Black Prince. In the 14th century, it housed the residence of William Jauderell and his descendants (the name also spelt Jodrell). The Jodrells continued to call their lands Yeardsley Whaley for centuries and when the first local government board was formed in 1863 and the area became an urban district, the town adopted its popular name of Whaley Bridge and the town has been called so ever since.

The River Goyt formed the historical boundary between Derbyshire and Cheshire. The present town of Whaley Bridge was divided into smaller towns in both counties. Historical records show that in 1316 on the Cheshire side there were Taxal, Yeardsley and Whaley, the last two being combined into one district of 'Yeardsley-cum-Whaley'. The Derbyshire side consisted only of Fernilee, which included the villages of Shallcross and Horwich. This side was in the parish of Hope and was part of the Forest of High Peak, while the Cheshire side was part of the Forest of Macclesfield. From 1796 Taxal and Yeardsley were effectively joined in that the Jodrell family was the main landowner in both towns, although the administration of these remained separate until 1936.

Until the late 19th century the population of the area grew slowly. For example, in the diocesan census in 1563, Taxal is recorded as having 26 households, and by the mid-18th century Taxal and Yeardsley together only reached 55 households. In 1791 land at Whaley Bridge was advertised for sale, the owner believing that its waterpower would be useful in the textile industry, but the two townships remained very small and only had a population of 853 between them by 1841. Up to this time agriculture and coalmining had been the main occupations.

The town expanded greatly in the Industrial Revolution and the population almost trebled to 2,322. Although there had been coal mines from earlier times, by 1871 cotton mills had become the dominant industry. Coal mining took place in the area from its very early days because of a large geographical fault which traverses the Whaley Bridge basin from east to west resulting in the coal outcropping in various places. Documentary evidence of 1587 indicates a well-established coal industry in the "Towneshepp of Weley", known today as Whaley Bridge. Today, there is less intensive agriculture labour and no coal mining in the area.

Whaley Bridge continues to expand as new housing is built, but it retains the character of a small town. As the self-styled 'Gateway to the Goyt' it attracts tourists, mainly walkers, but it has not become dominated by the tourist industry, unlike some other local towns and villages. With a good commuter railway service to Manchester many people travel to work in the Manchester or Cheshire areas. With the introduction of ADSL broadband internet services increasingly people work from home.

The town has been twinned with Tymbark, Poland since June 1994.

The Cromford and High Peak Railway was granted Parliamentary consent in 1825. It was fully opened for passenger and goods traffic on 6 July 1831. The railway linked the wharf at the head of the Whaley Bridge Branch of the Peak Forest Canal to the Cromford Canal at Cromford Wharf. It had seven inclined planes, the first being situated within the town of Whaley Bridge itself. Unlike the other six inclined planes, which were operated by stationary steam engines, this one was operated by a horse-driven gin, which remained operational until 9 April 1952. This plane was much shorter than the others, being only 180 yards (165 m) long and rising at 1:13.5. Approach to the top of the plane was under a very low bridge and, because of this, waggons had to be hauled to and from the top of the plane by horses.

The Peak Forest Canal and basin were built in the 1790s and opened on 1 May 1800. An important Grade 2 listed building at the head of the Peak Forest Canal was the Transhipment Warehouse, built in 1801 and extended after the arrival of the railway in 1832. In this building goods and minerals were transferred to and from the many working canal boats servicing local industry. The building straddles the head of the canal which is fed by the Combs and Toddbrook Reservoirs to the south. The canal splits just outside Whaley Bridge turning east to end at Buxworth basin and turning west to Marple, the Cheshire ring and Manchester.

The Church of England parish of Whaley Bridge has two churches. St James, Taxal stands on a site a mile from the town centre and was established in the 12th century. Parts of the tower may date back to that time, although much of the church was rebuilt in the 17th and 19th centuries. Holy Trinity, Fernilee was established near the town centre in 1905. Parts of the town are included in the Cheshire parish of St John, Disley, and are served by the Church of St John the Divine, Furness Vale.

The Roman Catholic Church of the Sacred Heart, Whaley Lane, serves the parish of Whaley Bridge and Disley.

The Good News Church is an evangelical church based in the Gospel Hall, Old Road.

Whaley Hall is a large detached Victorian house near Toddbrook Reservoir. Since 1979 it has been a retreat house and conference centre run by the "Community of the King of Love": an ecumenical community of men and women. The painting Magistrate of Brussels, by Anthony van Dyck, hung there, unrecognised, during the first decade of the 21st century.

Whaley Bridge has an annual carnival month in June. This launches on the second weekend of the month with 'Whaley Water Weekend', commonly known as W3. Launched in 2000, W3 started out as a small community event on the canal basin. It was relaunched in 2010 as a music and arts festival, building on its waterways core. The last event saw several thousand visitors, with record numbers taking advantage of free short canal boat rides and a longer heritage trip to Bugsworth Basin. In the evening crowds watched free live music on the outdoor stage. 2012 saw W3 enter into a partnership with the Canal & River Trust where they adopted the canal basin and the Peak Forest canal to the Bugsworth Arm.

The weekend of W3 is followed by the Well Dressing Weekend, a traditional Derbyshire event in which the local well is decorated with large collages of cones, flower petals, etc. Carnival month ends with the Rose Queen Carnival, started over a hundred years ago, where groups of local young people from the town, Rose Queen royalty from other villages and invited bands process through the main streets in their finery and on decorated floats culminating in events, stalls and entertainment held at Whaley Bridge Bowling Club. In 2009 a Fell Race, known as the Whaley Waltz, was added to the Rose Queen programme and annually attracts over 180 runners. Organised by Goyt Vally Striders, the race starts in the centre of the village and climbs 900 ft to Windgather Rocks and finishes after crossing the River Goyt on Forge Road. Following the carnival is the Rose Queen Pet Show, 4 July 2012, where locals bring their pets to compete in different classes.

November 2012 saw the relaunch of Whaley Bridge's firework event, with a new team of volunteers after the Round Table felt they were unable to continue. This also incorporated the town's first lantern parade.

The final event of the year is the switching on of the Christmas tree lights outside the Jodrell Arms Hotel, close to Whaley Bridge railway station. This is usually done by the chair of the Town Council and is accompanied by seasonable music from members of Whaley Bridge Brass Band. Father Christmas traditionally arrives at the Transshipment Warehouse on the Whaley Wharf of the Peak Forest Canal on a canal boat and processes to the Mechanics' Institute accompanied by his helpers. Businesses make their contribution to the town's Christmas decorations by way of small trees above their shops. The Town Council erects two large trees each year, the second being by the Soldier Dick public house at Furness Vale.

All content from Kiddle encyclopedia articles (including the article images and facts) can be freely used under Attribution-ShareAlike license, unless stated otherwise. Cite this article:
Whaley Bridge Facts for Kids. Kiddle Encyclopedia.