Chapel-en-le-Frith is a town and civil parish in Derbyshire, England.

Dubbed the "Capital of the Peak", as it was the first settlement of the Peak District. The Peak District is a historic term for the upperland areas which sat between the Saxon lands (below the River Trent) and the Vikings lands (which came as far south as Dore, Sheffield). It is thought that the word 'peak' does not relate to the hill shape but to the people who lived there and were derived from old English tribes (peaks or picts). The geography of the 'Peak District' is not synonymous with Peak District National Park boundary, which was established excluding town, quarry and industrial areas.

The town was established by the Normans in the 12th century, originally as a hunting lodge within the Forest of High Peak. This led to the French-derived name Chapel-en-le-Frith ("chapel in the forest"). (It appears in an English form in a Latin record as 'Chapell in the ffryth', in 1401.) The population at the 2011 census was 8,635.

The first chapel in the town (now the Church of St. Thomas Becket) was originally built by the Normans but was replaced with a larger building a hundred years later. It stands at the highest point in the town proper. The current building is now almost entirely of 18th century construction above a crypt of 1225 AD. Buried in the churchyard are soldiers of the Scottish army of the Duke of Hamilton who marched south in support of Charles I in 1648. After their defeat at Preston, they were marched to Chapel and imprisoned in the church for sixteen days in such squalid conditions that forty died; a further ten died when they were marched towards Cheshire. The Eccles Pike Cross stands in the churchyard, having been moved here from Ollerenshaw Farm in 1925. It is believed to be Anglo-Saxon and is covered in very worn carvings. 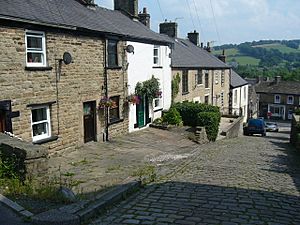 Church Brow in the town centre 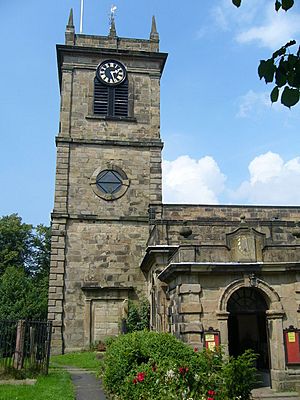 Chapel-en-le-Frith railway station is located 1.5 km (ca. 1 mile) from the town centre, on the commuter line from Buxton to Manchester Piccadilly. The other railway line passing through the town, (Chapel-en-le-Frith Central railway station) has a more central disused station built by the Midland Railway, was once one of the main lines from London to Manchester. While it no longer carries passenger traffic, it now carries a constant stream of roadstone from the quarries around Buxton. It terminates at its junction with the Manchester–Sheffield trans-Pennine line by way of two viaducts, diverging east and west, above the Black Brook valley at Chapel Milton near Chinley signalbox. 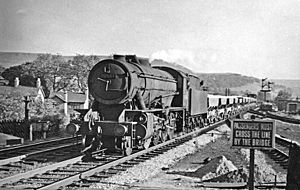 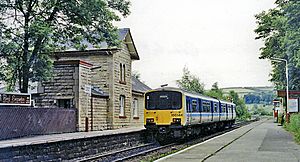 Station on the railway between Manchester Piccadilly and Buxton

To the north lie the Dark Peak highlands, which are made up of millstone grit and are heather-covered, rugged and bleak. Here are Chinley Churn and South Head with, a little further off, Kinder Scout, which looms above the whole area. To the south is the gentler and more pastoral White Peak, consisting largely of limestone grasslands, nevertheless with spectacular bluffs and the occasional gorge. Combs Moss, a gritstone 'edge', dominates the valley in which Chapel lies from the south and Eccles Pike rises sharply above the town to its west and provides a commanding 360° viewpoint.

Landmarks of the parish 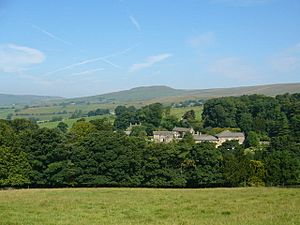 Ford Hall and surrounding buildings
South Head in the background

Ford Hall in the east of the parish, northeast of Slacke Hall and Bowden Hall, was the home of the Reverend William Bagshaw, the 'Apostle of the Peak', after he was ejected from the vicarage of Chinley on the Act of Uniformity in 1662.

Also in the east of the parish, next to a lake alongside the A623 and not nationally listed for its architecture, is the modest Bennetston Hall, which is being renovated as a hotel. Nearby are the site of Peaslow's Cross, and Rushup Hall, a modest but ornate 19th-century private house.

Stodhart Lodge, a care home, is north of the town centre on the Hayfield Road, the old road to Chapel Milton and the rest of the neighbouring parish of Chinley. It has a later 19th-century extension in the neo-gothic architectural style with a datestone inscribed "JB 1869".

Along the B5470 road west of the town are the linear settlements of Bridgefields, Cockyard and Tunstead Milton. Ollerenshaw Hall dates from c.1800 and stands below Eccles Pike.

The village of Combs, west of the town, gives its name to the adjacent Combs Reservoir. The Old Brook House (and its barn), close to the Beehive Inn in the centre of Combs, are listed buildings; parts of the house's grand layout clearly date from the 17th and 18th centuries and, as such, it is similar to Marsh Hall closer to Chapel.

In the rolling hills between Combs and Chapel is Bank Hall, extensively altered in 1872–74 for Henry Renshaw of Manchester on an ornate aerial plan with an elaborate stone balcony over the door, a bay window with fine botanical painted glass and canvas panels to the doors, formerly with painted panels by Armstrong and Caldecott. The south elevation of the house has a central Venetian doorway with columns either side of double-glazed doors—here too are voussoirs decorated with floral motifs, set in an imposing ashlar surround. Its nearby lodge, by W.E.Nesfield, is also listed, as is nearby Chapel railway station.

Dove Holes, in the southeast of the parish, has its own station. Within the village lie the earthworks of a Neolithic henge known as the Bull Ring; the site also includes an oval and bowl barrow.

The town's football team is Chapel Town F.C., playing in Division One of the Manchester Football League. There is a golf course on the western edge of the town.

There is also a leisure centre, with tennis courts co-located with High School which provides a range of fitness classes and sports facilities.

All content from Kiddle encyclopedia articles (including the article images and facts) can be freely used under Attribution-ShareAlike license, unless stated otherwise. Cite this article:
Chapel-en-le-Frith Facts for Kids. Kiddle Encyclopedia.