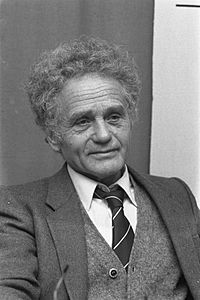 Yuri Fyodorovich Orlov (Russian: Ю́рий Фёдорович Орло́в, 13 August 1924 – 27 September 2020) was a Soviet-born Russian nuclear physicist and human rights activist. He was born in Moscow. He was a Soviet dissident.

Orlov was the founder of the Moscow Helsinki Group and a founding member of the Soviet Amnesty International group.

Orlov was the Professor of Physics at Cornell University. He was declared a prisoner of conscience while serving nine years in prison and internal exile for monitoring the Helsinki human rights accords as a founder of the human rights movement in the Soviet Union.

All content from Kiddle encyclopedia articles (including the article images and facts) can be freely used under Attribution-ShareAlike license, unless stated otherwise. Cite this article:
Yuri Orlov Facts for Kids. Kiddle Encyclopedia.