The 2010–11 season is Manchester United's 19th season in the Premier League.

Manchester United started their season with a tour in North America for the first time since 2004. 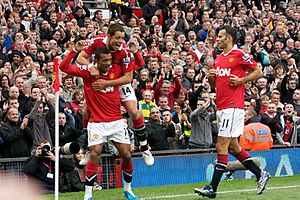 Nani celebrates with Hernández and Giggs

All content from Kiddle encyclopedia articles (including the article images and facts) can be freely used under Attribution-ShareAlike license, unless stated otherwise. Cite this article:
2010–11 Manchester United F.C. season Facts for Kids. Kiddle Encyclopedia.