Ackerly Creek is a tributary of South Branch Tunkhannock Creek in Lackawanna County, Pennsylvania, in the United States. It is approximately 8.7 miles (14.0 km) long and flows through South Abington Township, Waverly Township, Glenburn Township, Dalton, and La Plume Township. The creek has several unnamed tributaries and drains an area of nearly 18 square miles (47 km2). Ackerly Creek is not designated as an impaired waterbody, but it is impacted by some water quality problems. In one reach, the creek flows through Rabbit Hollow, which is set aside as a preserve. The creek experiences some erosion due to its banks being managed and straightened where it flows alongside US Route 6 and US Route 11.

The watershed of Ackerly Creek mainly consists of suburban and residential land use, but there are some urbanized areas. It is both the southernmost and most developed part of the watershed of Tunkhannock Creek. There is also a former Superfund site in the creek's watershed. Several historic sites are in the watershed, and a bridge on the Historic American Engineering Record crosses the creek. The watershed of Ackerly Creek is designated as a Coldwater Fishery and a Migratory Fishery and is inhabited by some trout, as of the 1990s. Numerous recreational sites, both public and private, exist within the creek's watershed. 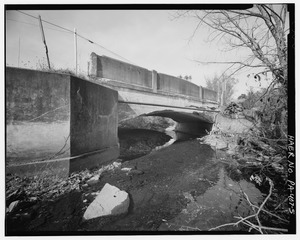 From the northern end of Glenburn Pond, Ackerly Creek flows north-northwest alongside US Route 11 for a few miles, passing through Dalton and entering La Plume Township. There, the creek turns west for a short distance before turning northwest for several tenths of a mile. It then turns west for a few tenths of a mile before turning south and then west again. At this point, it reaches its confluence with South Branch Tunkhannock Creek.

Ackerly Creek has no named tributaries. However, it does have a number of unnamed tributaries joining from both sides, including UNT 28833, UTN 28835, UNT28836, and UNT28840. One major branch of the creek begins near Florey's wetlands and flows from Gravel Pond to Glenburn Pond.

Ackerly Creek is not designated as an impaired waterbody. However, its tributary UNT 28835 is impaired. According to the Pennsylvania Department of Environmental Protection, the watershed of Ackerly Creek is the most "stressed" watershed in the Tunkhannock Creek drainage basin. In the 1970s, Ackerly Creek was found to be in good condition. However, there were very low flows at its headwaters.

Keystone College has a hydrogeology laboratory on Ackerly Creek.

In one reach, Ackerly Creek flows through a hollow—a shallow valley— known as Rabbit Hollow. The creek was historically dammed to create a pond there, but there is no longer a pond at that location.

In a reach where Ackerly Creek flows alongside US Route 6 and US Route 11, it has been managed and straightened. This contributes significantly to streambank erosion on the creek. There are roughly a dozen sites with unstable stream bank, and there are several bridge crossings of the creek. There is relatively little garbage along the creek.

There is a swamp at the headwaters of Ackerly Creek.

The area in the vicinity of Ackerly Creek was historically a haven for escaped slaves. There are several historic sites in the creek's watershed, including the Abington Baptist Church, the Madison Academy, the Waverly Community House, Keystone College, the Northern Electric Street Railway Line, and the Ackerly Fairgrounds. The Delaware, Lackawanna and Western Railroad historically passed through the valley of the creek.

Between 1972 and 1993, a company had a National Pollutant Discharge Elimination System permit to discharge industrial waste in a swamp at the headwaters of Ackerly Creek.

The Land and Water Committee of the Countryside Conservancy began a formal study of the watershed of Ackerly Creek in 1999. In 2007, the Glenburn Pond Dam on the creek was slated for removal. Such a project would take several years and would restore 20 acres (8.1 ha) of wetlands and riparian buffers. Keystone College once received a $31,430 Growing Greener grant for riparian buffer restoration on the creek.

The main stem of Ackerly Creek is designated as a Trout Stocked Fishery and a Migratory Fishery. However, its unnamed tributaries are designated as Coldwater Fisheries and Migratory Fisheries. As of the 1990s, there is a small trout population in the creek. A total of fourteen salamander species, thirteen snake species, ten species of frogs and toads, and four turtle species.

Numerous recreational sites, both private and public, exist within the watershed of Ackerly Creek. Major recreational sites in the watershed include the Ackerly Playing Fields, the 16-acre (6.5 ha) Rabbit Hollow Sanctuary for passive recreation and nature observing, the Dalton Streamside Park, the private Glen Oaks Country Club, and Glenburn Pond. The Rabbit Hollow preserve was donated to the Pennsylvania Chapter of The Nature Conservancy in 1975 and was designated as a preserve in 1977, and came to be owned by Abington Township.

A walking trail known as The Trolley Trail is also in the watershed of Ackerly Creek, on the former Northern Electric Trolley Line.

All content from Kiddle encyclopedia articles (including the article images and facts) can be freely used under Attribution-ShareAlike license, unless stated otherwise. Cite this article:
Ackerly Creek Facts for Kids. Kiddle Encyclopedia.