Axbridge is a small town in Somerset, England, in the Sedgemoor district on the River Axe, near the southern edge of the Mendip Hills. The town's population according to the 2011 census was 2,057.

Axanbrycg is suggested as the source of the name, meaning a bridge over the River Axe, in the early 9th century.

Early inhabitants of the area almost certainly include the Romans (who are known to have mined lead on the top of the Mendips) and earlier still, prehistoric man, (who lived in the local caves) whose flint tools have been found on the slopes of the local hills. The history of Axbridge can be traced back to the reign of King Alfred when it was part of the Saxons' defence system for Wessex against the Vikings. In the Burghal Hidage, a list of burbs compiled in 910 it was listed as Axanbrycg. A listing of Axbridge appears in the Domesday survey of 1086 as Alse Bruge, meaning 'axe bridge' from the Old English isca and brycg. It was part of the royal manor of Cheddar and part of the Winterstoke Hundred. 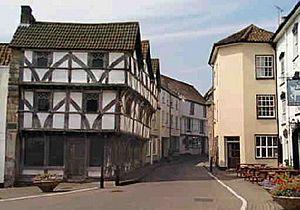 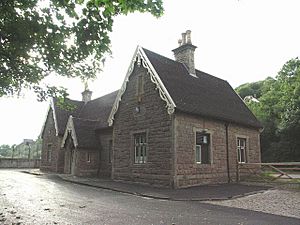 It was granted a Royal Charter in 1202, when King John sold most of the royal manor of Cheddar to the Bishop of Bath and Wells. Axbridge grew in the Tudor period as a centre for cloth manufacture, This was reflected in its early royal charters allowing it to hold markets, fairs and become a royal borough. It even had its own mint, with coins showing the town's symbol: the Lamb and Flag. Trade was possible as the River Axe was navigable to wharves at Axbridge.

Later the town's importance declined which led to stagnation and the preservation of many historic buildings in the town centre. These include King John's Hunting Lodge (actually a Tudor building) which is now used as a museum.

Axbridge is a very old borough and sent members to parliament in the reigns of Edward I and Edward III.

During the 19th and early 20th centuries iron ore was extracted from the hill above and east of Axbridge.

Axbridge railway station, on the Cheddar Valley line, opened on 3 August 1869. It closed to goods traffic on 10 June 1963 and passengers on 9 September 1963. The route of the railway is now the A371 Axbridge bypass, but the station buildings and goods shed still survive.

The Square was used as the setting for a NatWest Bank advert in the early nineties, and in particular the Town Hall which doubled as NatWest Branch. Ironically a real branch of NatWest, which was situated in the High Street, was closed not long afterwards and the premises are now private residential accommodation.

In 2012, The Roxy community cinema was reopened after a five-year renovation programme. This was aided by the Big Lottery Fund, and re-used old seats from the Colston Hall in Bristol. It has 32 seats and an art deco box office. The premises used to be the Axbridge Lion pub, a Georgian Grade II listed building.

The Axbridge Film Society is based at the cinema. In 2016 volunteers raised £5,000 for repairs to the cinema and plans have been drawn up for further refurbishment and the installation of new sound and projection equipment.

The thirteenth-century parish Church of St John is a grade I listed building.

Work on the current building began in the early 15th century, and grew from an earlier building dating back to about 1230. The church is built of limestone and decorated with Doulting stone, while the steps are an interesting example of Dolomitic Conglomerate (pudding stone). The crossing tower is over 100 feet (30 m) high, and holds six bells, one of which dating from 1723 was made by Edward Bilbie of the Bilbie family. The statue on the east side is that of St John the Baptist. On the west side is a king — perhaps Henry VII, which would place it after 1485. The North aisle ceiling retains some mediaeval painted panels, and amongst the carved bosses is the head of a Green Man, with leaves sprouting around his face. The nave roof is Jacobean and dates from 1636. Restoration was undertaken in 1888 by J.D. Sedding, who contributed the fine parclose screens.

In contrast to the much larger settlement of Cheddar immediately to the south east that remains a village, Axbridge is a town. This apparently illogical situation is explained by the relative importance of the two places in historic times. While Axbridge grew in importance as a centre for cloth manufacture in the Tudor period and gained a charter from King John, Cheddar remained a more dispersed dairy-farming village until the advent of tourism and the arrival of the railway in the Victorian era.

The Axbridge Union workhouse was erected in 1837 at the south side of West Street in Axbridge. The Poor Law Commissioners authorised an expenditure of £4,496.17s.6d on construction of the building which was intended to accommodate 250 inmates. It was designed by Samuel T Welch who was also the architect of workhouses at Wells and Clifton. By 1929 the workhouse had become officially known as Axbridge Poor Law Institution.

Axbridge has a very active community and holds a number of events each year.

On the Saturday of the first Bank Holiday weekend in May, the annual Somerset Showcase takes place, which is a fun filled day for the whole family featuring the best Somerset has to offer, including craft displays and market, farmers' market, entertainment, exhibitions and live music in the evening. It has become a firm favourite amongst the events held in the town each year, and attracts visitors from all over the area.

September also sees the annual Blackberry Carnival, Fair in the Square and Harvest Home which was introduced in 2007. Other events throughout the year include the Progressive Supper and Santa in the Square.

Axbridge Cricket Club are a predominant force in the community, established in 2004, they club now plays around 35 friendly fixtures per season, which is growing at a steady rate. The club also enjoys an annual club tour and plays other friendly sides around the Somerset county.

Since 2009, a Concert by Candlelight has been held in the Church of St John the Baptist to coincide with Earth Hour.

Axbridge hosts a Pageant every 10 years. This started in 1967, in celebration of the opening of the bypass. The next pageant was in 1970 & there has been one every decade since then.

All content from Kiddle encyclopedia articles (including the article images and facts) can be freely used under Attribution-ShareAlike license, unless stated otherwise. Cite this article:
Axbridge Facts for Kids. Kiddle Encyclopedia.