The Berkeley Jazz Festival is held once a year at the outdoors Hearst Greek Theatre on the University of California, Berkeley campus. The theatre overlooks the San Francisco Bay at Hearst & Gayley Road. The festival was started in 1967 by Darlene Chan. 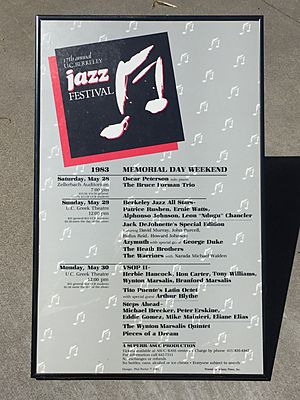 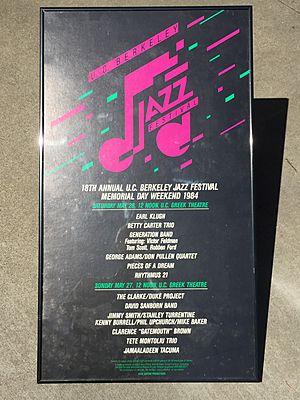 The first festival was scheduled to be held April 7–8 at the Greek Theater on the Berkeley campus of the University of California, but due to heavy rain it was moved indoors into Harmon Gym. Friday evening saw sets by Miles Davis, the Modern Jazz Quartet, and the Gerald Wilson Big Band. On Saturday, the Bill Evans Trio, the Horace Silver Quintet, the John Handy Concert Ensemble, and Big Mama Thornton performed. The festival was planned and sponsored by the Union Program Board of the Associated Students of the University of California and the Interfraternity Council with Ralph J. Gleason, columnist of the S.F. Chronicle, as friend and advisor. Darlene Chan was the Festival's founder and its first Director.

The second annual festival was sponsored by the Union Program Board of the Associated Students Of the U of California and held in April–May. Miles Davis, Carmen McRae, Bobby Hutcherson and Harold Land Quartet, Billy Taylor, Thelonious Monk, Cecil Taylor. He was not there. Billy Taylor was both a performer (piano) and the Emcee of the piano workshop and the evening concerts --> and the Thad Jones/Mel Lewis Big Band with Joe Williams . Davis appeared with the Gil Evans Orchestra, the first time the two men had played together since their 1961 Carnegie Hall concert. Wayne Shorter composed some of the music played by Davis and Gill Evan's Orchestra.The 1968 performance was Davis' last one with that group. Lalo Schifrin lectured on jazz music on April 20. Guitarist Wes Montgomery appeared with his two brothers: Monk on piano and Buddy on electric bass. Pianist Thelonious Monk gave a concert and conducted a workshop which was delayed until six small space heaters could be located and brought to the stage, as his hands were cold. At first he performed wearing gloves with cut-out fingers.Denny Zeitlin, a Marin County Psychiatrist who had recently done a record for Columbia joined Taylor and Monk at the afternoon workshop. Jamie Bennett was the Chair of UPB and the Director of the Festival. 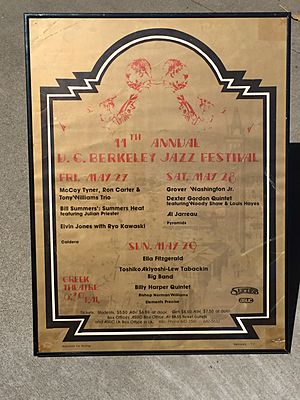 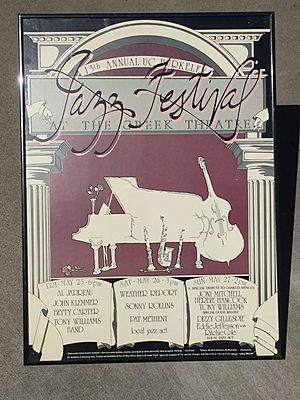 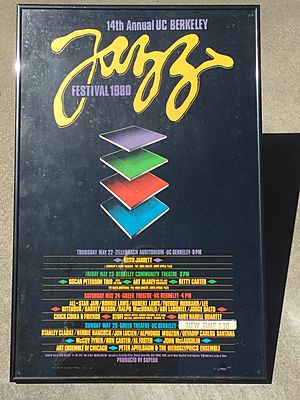 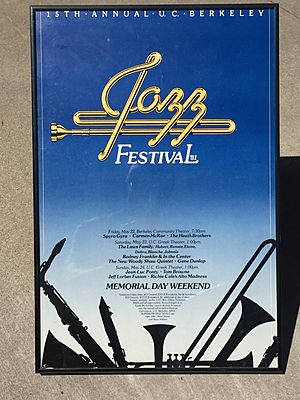 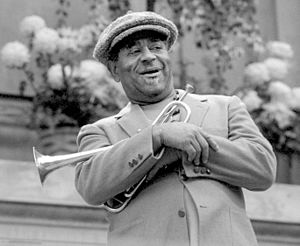 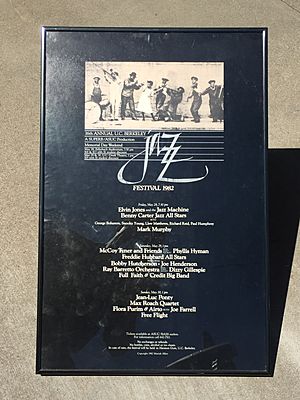 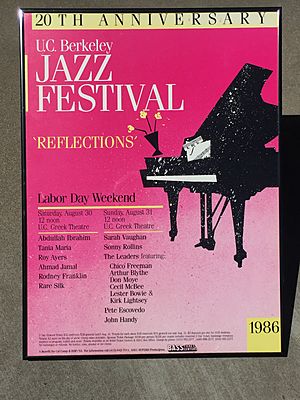 All content from Kiddle encyclopedia articles (including the article images and facts) can be freely used under Attribution-ShareAlike license, unless stated otherwise. Cite this article:
Berkeley Jazz Festival Facts for Kids. Kiddle Encyclopedia.