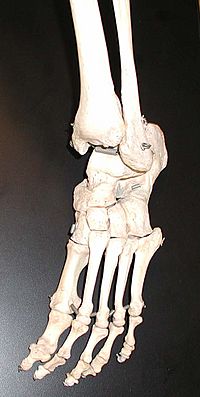 The bones of a human foot

Bones are parts of the human or animal skeleton of vertebrates. They are stiff organs which make up the endoskeleton. Our body is made of flesh and blood built on a framework of bones. Without our bones, we could not stand up or move about. They also protect organs inside our body. The skull protects the brain and the ribs protect the heart and lungs. The jaw and cheekbones support the facial muscles, which help us smile. The number of bones in a human's neck is the same as a giraffe's.

The bones are the framework of the body. Without them we would be a pile of organs on the ground and would not be able to move. The bones are also very important for our protection, that is, the rib cage protects the heart and lungs, cranium (skull) protects the brain, pelvis protects the reproductive organs, vertebrae protect the spinal cord. Bones need to be maintained by taking regular exercise and by having lots of calcium from foods like milk, and dark leafy greens such as spinach. The red bone marrow in the middle of the bigger bones is what makes the red blood cells that we need. 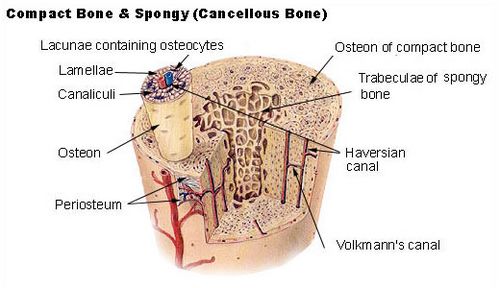 Osteons are the parts of the haversian system. They are found in the bone in most mammals, and many reptiles, birds and amphibians. Inside the osteons are bone cells called osteocytes, each living in its own small space. Osteocytes make contact with each other by cytoplasmic processes through a network of tiny canals. This allows the exchange of nutrients and metabolic waste. Collagen fibers in each ring of cells ('lamellae') give them structure.

Osteons have a hole down the middle, called the haversian canal. This canal contains the bone's blood supply. It contains capillaries, and nerve fibres.

Inside long bones is a central core which is not there to give strength and structure. It contains the bone marrow, one of the most important tissues in the vertebrate body. It produces blood cells for the blood system, and lymphocytes for the immune system. 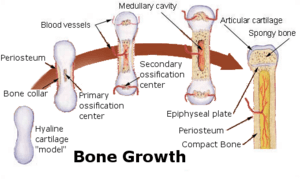 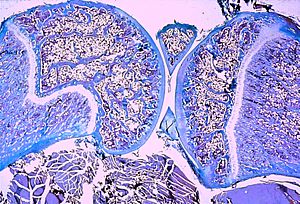 Intramembranous ossification mainly occurs during formation of the flat bones of the skull but also the mandible, maxilla, and clavicles; the bone is formed from connective tissue such as mesenchyme tissue rather than from cartilage. The process includes: the development of the ossification center, calcification, trabeculae formation and the development of the periosteum.

Endochondral ossification begins with points in the cartilage called "primary ossification centers." They mostly appear during fetal development, though a few short bones begin their primary ossification after birth. They are responsible for the formation of the diaphyses of long bones, short bones and certain parts of irregular bones. Secondary ossification occurs after birth, and forms the epiphyses of long bones and the extremities of irregular and flat bones. The diaphysis and both epiphyses of a long bone are separated by a growing zone of cartilage (the epiphyseal plate). At skeletal maturity (18 to 25 years of age), all of the cartilage is replaced by bone, fusing the diaphysis and both epiphyses together (epiphyseal closure). In the upper limbs, only the diaphyses of the long bones and scapula are ossified. The epiphyses, carpal bones, coracoid process, medial border of the scapula, and acromion are still cartilaginous.

The following steps are followed in the conversion of cartilage to bone: 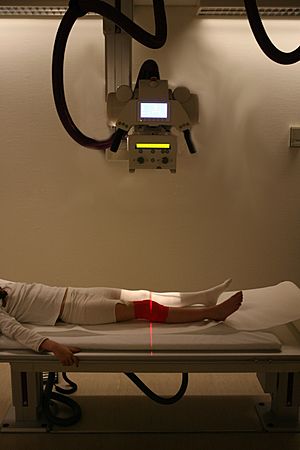 In normal bone, fractures occur when there is significant force applied, or repetitive trauma over a long time. Fractures can also occur when a bone is weakened, such as with osteoporosis, or when there is a structural problem, such as when the bone remodels excessively (such as Paget's disease) or is the site of the growth of cancer. Common fractures include wrist fractures and hip fractures, associated with osteoporosis, vertebral fractures associated with high-energy trauma and cancer, and fractures of long-bones. Not all fractures are painful. When serious, depending on the fractures type and location, complications may include flail chest, compartment syndromes or fat embolism. Compound fractures involve the bone's penetration through the skin. Some complex fractures can be treated by the use of bone grafting procedures that replace missing bone portions.

Fractures and their underlying causes can be investigated by X-rays, CT scans and MRIs. Fractures are described by their location and shape, and several classification systems exist, depending on the location of the fracture. A common long bone fracture in children is a Salter–Harris fracture. When fractures are managed, pain relief is often given, and the fractured area is often immobilised. This is to promote bone healing. In addition, surgical measures such as internal fixation may be used. Because of the immobilisation, people with fractures are often advised to undergo rehabilitation.

All content from Kiddle encyclopedia articles (including the article images and facts) can be freely used under Attribution-ShareAlike license, unless stated otherwise. Cite this article:
Bone Facts for Kids. Kiddle Encyclopedia.