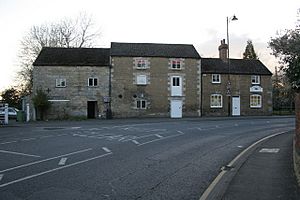 Bourne Civic Society is a voluntary organization concerned with the development of the town and community of Bourne, Lincolnshire, England.

It was founded in 1977 at a time of a rapid expansion of the town. Its aim is to carry the good features of the town from the past into the future, while improving the existing structures.

The society arranges talks and visits but its most visible work has gone into its heritage centre in Baldock's Mill.

In the early years of the society's existence, it set up short-term exhibitions in places like the Red Hall, to draw attention to what the town had achieved in the past and to date. A notable one, in 1984, commemorated the town's accommodating Parachute Regiment men, in the months before they flew to Arnhem in 1944.

However it was seen as important that the society should have a base of its own in which a permanent exhibition could be developed for townspeople and visitors. For this purpose, a lease was negotiated with Bourne United Charities, allowing use of Baldock's Mill the former tenant of which, the Red Cross, had moved to new premises. The building was renovated and converted by voluntary work and youth training schemes, under the guidance of a chartered surveyor member of the society. The mill is a grade II Listed building in its own right.

Since 1988, the displays have been developed, at first with temporary exhibitions such as one commemorating the 850th anniversary of Bourne Abbey's charter. Since then numerous small collections have been put together. The three largest features are now:

All content from Kiddle encyclopedia articles (including the article images and facts) can be freely used under Attribution-ShareAlike license, unless stated otherwise. Cite this article:
Bourne Civic Society Facts for Kids. Kiddle Encyclopedia.