Chuck E. Cheese's (officially Chuck E. Cheese Pizzeria & Games) is a chain of American family entertainment centers and restaurants. The chain is the primary brand of CEC Entertainment, Inc. and is headquartered in Irving, Texas. The establishment serves pizza and other menu items, complemented by arcade games, amusement rides, and animatronic displays as a focus of entertainment for the entire family. The brand derives its name from its main animatronic character Chuck E. Cheese, a comedic mouse who sings and interacts with guests.

Chuck E. Cheese's Pizza Time Theatre in San Jose, California, was the first location to open on May 17, 1977. The concept was authored by Atari co-founder Nolan Bushnell, credited with bringing video games such as Pong to the mainstream. The Pizza Time Theatre was the first family restaurant to integrate food, animated entertainment, and an indoor arcade.

They redesigned the logo in 1994, dropping Pizza from each store's name. As of 2017, 523 Chuck E. Cheese stores are open. The "E" standing for entertainment.

Chuck E. Cheese’s Pizza Time Theatre was founded by Atari founder Nolan Bushnell, who was seeking to expand the purview of video game arcades beyond more adult locations like pool halls to a kid and family friendly venue. Gene Landrum then resigned from Atari and was made President and Chief Operating Officer of Chuck E. Cheese Pizza Time Theater. 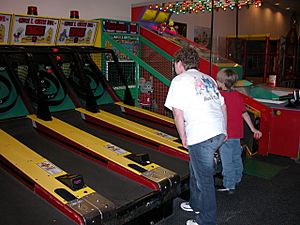 Skee-ball at a Chuck E. Cheese

In the early 1980s, the restaurant franchise debuted in Australia under the name Charlie Cheese's Pizza Playhouse. The name change had to do with the common meaning of the word "chuck", which in Australia is a reference to the phrase "to throw up".

In August 2017, Chuck E. Cheese's announced that it had begun to remodel seven of its locations (three in Kansas City, four in San Antonio) to pilot a new design concept, branded as Chuck E. Cheese Pizzeria & Games. They feature a more upscale decor with "muted" colors and wood paneling, an open kitchen, a and the replacement of the chain's traditional stage and animatronic shows with a new dance floor-styled play area. These changes, along with expansions to food offerings, are intended to help the chain encourage family dining and provide an experience that can appeal better to adults.

Starting on November 13, 2012, new gluten-free menu items are available at more than 500 locations in the U.S. and Canada. This currently includes a choice of a personal-size cheese pizza and new items such as chocolate or vanilla sheet cakes and cotton candy.

From the time of the company's inception to today, one of the main draws for the stores has been the arcade. The arcade games primarily consist of either redemption games or video arcade games.

The brass tokens issued by the company for use in their arcades exist in numerous varieties, and are collected by enthusiasts. 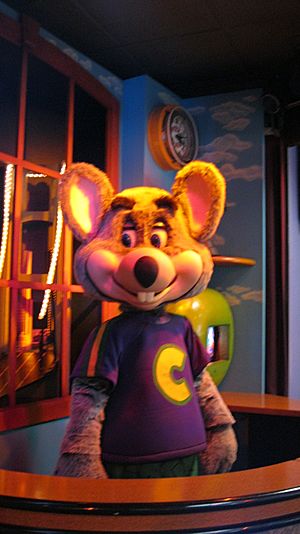 Along with the arcade, the other main draw for the centers since the beginning was its animatronic show, until the mid-1990s. More recently, less attention has been placed on animatronics. However, there are now several different styles of animatronic shows in use within the company, depending on when the location opened, whether it was renovated, and other factors.

Beginning in 1998, the show consists of a single animated Chuck E. Cheese character created by Garner Holt alongside large television monitors, lighting effects, and interactive elements. The other characters appear as puppets on the TV screens. In some markets, the company has also tried a new store concept that omits the animated show entirely. This is the Circle of Lights stage which either consists of a live Chuck E. Cheese costume character or an animatronic in a futuristic light stage with large television monitors. In 2017, the newly renamed Chuck E. Cheese Pizzeria & Games announced that animatronic shows would be removed in favor of a modernized dance floor. The move is being piloted in a handful of locations prior to being implemented company-wide.

The members that performed in the animatronic shows were: 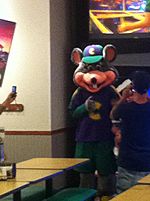 A Chuck E. Cheese walkaround character performing for guests in 2011.

There are two types of costumed shows used by Chuck E. Cheese's: the LIVE! show and the Road show. The LIVE! show is performed at the front of the stage in the showroom, whenever a child is celebrating a birthday. The live show is a way of pumping up the crowd before a customized rendition of "Happy Birthday" is sung to the child that is celebrating the birthday ("I say Happy, you say Birthday..."). A costumed Chuck E. Cheese dances with the guests and sings, while being accompanied by the cast members. The Road show is a performance by a costumed Chuck E. Cheese character, and is performed outside the normal showroom. Children are gathered via the public announcement system or by Chuck E. Cheese himself. Chuck E. Cheese wants the kids to dance in order to win free tickets. The free tickets are thrown at the end of the performance for all the kids that participated. Chuck E. comes out every hour on the half hour (12:30, 1:30, etc.). The songs Chuck E. and the kids dance to are usually well-known classic songs such as "If You're Happy and You Know It" and "Head, Shoulders, Knees, and Toes".

All content from Kiddle encyclopedia articles (including the article images and facts) can be freely used under Attribution-ShareAlike license, unless stated otherwise. Cite this article:
Chuck E. Cheese's Facts for Kids. Kiddle Encyclopedia.