Detroit Lakes is a city in the State of Minnesota and the county seat of Becker County. The population was 9,869 at the 2020 census. Its unofficial population during summer months is much higher, estimated by citizens to peak at 13,000 midsummer, due to seasonal residents and tourists.

U.S. Highways 10 and 59, and Minnesota State Highway 34 serve as the primary routes through the city. Detroit Lakes is located 45 miles east of the Fargo–Moorhead ND-MN statistical metropolitan area. The nearest major metropolitan area with a population over 1 million is Minneapolis–Saint Paul, which is approximately 205 miles southeast of Detroit Lakes.

Detroit Lakes is a regional summer and winter recreation destination, attracting large numbers of tourists and seasonal residents each year. Its economy is fueled by seasonal population increases, with tourism being the area's chief industry.

The city of Detroit Lakes was founded by Colonel George Johnston in 1871. The city grew quickly with the construction of the Northern Pacific Railroad. In 1877, an election finally decided that Detroit Lakes, then known as Detroit, was to become the county seat. Detroit won the election by a ninety percent majority. The nearby cities of Frazee, Lake Park, and Audubon were also in the running for the county seat. By 1884, Detroit Lakes had many businesses, including the Hotel Minnesota, the Lakes Hotel, a bank, a newspaper, and an opera house. The first county courthouse was built in Detroit Lakes that year also.

According to the American Community Survey (ACS), the 2019 population of Detroit Lakes is 9,147. 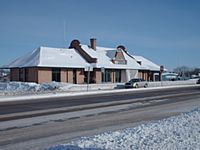 In and around Detroit Lakes are several lakes used for fishing, boating, wake sports, sailing, jet-skiing, swimming, and freshwater scuba diving. Most prominent and heavily used is Detroit Lake, which features the mile-long city beach. The beach annually hosts the city's Independence Day celebration and fireworks display. In and around Detroit Lakes are 14 golf courses. The area also features an amusement park, a paintball arena, two river tubing companies, and a horseback riding ranch. The city also hosts the annual Becker County Fair. The Shrine Circus performs in Detroit Lakes each year at the Kent Freeman Arena. In the winter off-season, the area remains a popular recreation destination for ice fishing, snowmobiling, cross country skiing and downhill skiing and snowboarding at the newly renovated Detroit Mountain Recreation Area. The City is one of maybe five in the Nation that has a park dedicated to the Grand Army of the Republic (rededicated on April 15, 2015).

Main entrance to the Historic Holmes Theatre in winter

Each August since 1983, the city has hosted WE Fest, a prominent camping and country music festival. Campgrounds packed with tents surround a large stage, and the three-day concert attracts around 50,000 music-lovers each summer. In 2007, the attendance reached a record high of 83,000 people over the weekend at the themed "Heavin in '07" concert. The music festival is held annually at the Soo Pass Ranch on Highway 59 south of Detroit Lakes. The 2013 lineup included Eric Church, Keith Urban, Carrie Underwood, Big & Rich, Kellie Pickler, Kenny Rogers, Darius Rucker, Little Big Town, Wade Hayes, and many other stars of country music.

Formerly held in July each year at the Soo Pass Ranch venue, the 10,000 Lakes Festival was put on official hiatus status as of December 18, 2009, until further notice. According to 10KLF.com the festival could not grow to financial success. http://www.10klf.com/. 10KLF featured alternative acts such as Widespread Panic, Dave Matthews Band, Wilco Umphrey's McGee, Atmosphere, Ozomatli, Mason Jennings, Sharon Jones & The Dap Kings, Trampled By Turtles and many others.

There are several Christian churches in and around the city of Detroit Lakes. In greatest number are Lutheran churches of varied synods. In addition to Holy Rosary Church (a large Roman Catholic parish), the city contains one of each of the following denominational churches: Episcopal Church, United Methodist, Assemblies of God, United Church of Christ, Mennonite, The Church of Jesus Christ of Latter-day Saints, Jehovah's Witnesses, Seventh-day Adventist Church, Community Alliance Church Christian & Missionary Alliance, eXperience Church, Vineyard Church. There is also an interdenominational Christian Fellowship Church.

Detroit Lakes is referred to in the author John Steinbeck's book, Travels with Charley, as he and his dog Charley drove through the upper midwestern United States.

A postcard depicting the Fairyland Cottages in Detroit Lakes appear in the opening credits of the 1983 movie National Lampoon's Vacation, though the cabins no longer stand as it was destroyed in May, 2008 by the Detroit Lakes Fire Department in a training exercise. It's now home to a condo unit. Source: http://www.dl-online.com/content/fairyland-cottages-destroyed-controlled-fire-tuesday

A fictional version of its courthouse and rural countryside is featured in Ali Selim's 2006 independent film Sweet Land, a love story revolving around a German immigrant's settlement in rural Becker County, Minnesota in the aftermath of World War I. The scene was filmed in Montevideo, Minnesota.

Ed Schultz, MSNBC anchor of his eponymous Ed show, often taped or broadcast his show live from a studio in Detroit Lakes.

The city's economy is largely driven by summer tourism and seasonal population increases. A variety of health care services, retail stores, and service businesses are available to area residents and tourists. Detroit Lakes is home to approximately 15 chain and independent hotels. Numerous resorts in the area provide many additional units. The city's downtown offers a 135,000-square-foot (12,500 m2) shopping center, including Washington Square Mall. Most newer chain retail businesses, including discount and home centers, restaurants, and strip malls, are located along Highways 10 and 59. The city is also home to a number of businesses servicing tourism ranging from sporting goods retailers to amusement parks and river tubing companies. With two industrial parks in the city's outskirts, it is also home to many manufacturing and industrial businesses.

The Detroit Lakes campus of the Minnesota State Community and Technical College system is one of four campus locations (others are in Moorhead, Fergus Falls, and Wadena). The Detroit Lakes campus, located on Minnesota Highway 34, enrolls approximately 650 students in 25 different degree programs. The college offers both classroom and online distance education programs and grants AAS, AS, diploma, certificate, and AFA degrees.

Built in 1913 with a $10,000 grant from the Andrew Carnegie Foundation, the Detroit Lakes Public Library is a branch of the Lake Agassiz Regional Library Network (LARL). Originally 4,142 square feet (384.8 m2) on two floors, the library was designed by the architectural firm of Claude and Starck of Madison, Wisconsin. The building today is on the National Register of Historic Places. Most notably, the building features a Louis Sullivan exterior frieze, lead and stained glass windows and doors, and a completely open and unobstructed interior. The building, designed in the prairie school architectural style popularized by such architects as Louis Sullivan and Frank Lloyd Wright, is also noted for its orange clay-tiled hip roof that defies regional construction convention. In 1985, due to space issues, the original Carnegie building was expanded.

All content from Kiddle encyclopedia articles (including the article images and facts) can be freely used under Attribution-ShareAlike license, unless stated otherwise. Cite this article:
Detroit Lakes, Minnesota Facts for Kids. Kiddle Encyclopedia.