Fair Lawn was incorporated as a borough by an act of the New Jersey Legislature on March 6, 1924, as "Fairlawn," from portions of Saddle River Township. The name was taken from Fairlawn, David Acker's estate home, that was built in 1865 and later became the Fair Lawn Municipal Building. In 1933, the official spelling of the borough's name was split into its present two-word form as "Fair Lawn" Borough.

Radburn, one of the first planned communities in the United States, is an unincorporated community located within Fair Lawn and was founded in 1929 as "a town for the motor age." Fair Lawn is home to a large number of commuters to New York City, to which it is connected by train from two railroad stations on NJ Transit's Bergen County Line, the Radburn and Broadway stations.

Fair Lawn's motto is "A great place to visit and a better place to live." Fair Lawn has been rated as one of the top 10 best places to live in New Jersey. According to Nerdwallet, Fair Lawn witnessed a 5.3% increase in its working-age population between 2009 and 2011.

The first settlers of Fair Lawn were members of the Lenni Lenape tribe, a peaceful group of hunter gatherers who eventually sold their land to incoming Dutch and Irish Settlers and migrated to Pennsylvania. The new colonists turned the region, part of the New Barbadoes Township, into five large farm lots, conjoined by two main roads - Paramus and Saddle River - and named it "slooterdam" (after a V-shaped sluice-like fishing weir built in the Passaic by the Lenni Lenape). The name stuck until 1791. In the 1800s, these five lots became nine smaller lots, and three new roads - Fair Lawn Avenue, Lincoln Avenue, and Prospect Street - were constructed to encourage mobility between them. Eighty houses were built by 1861, and the renamed Small Lots, now a part of the Saddle River Township and home to multiple vegetable and fruit farms and dairies, became a clear agricultural community. Berdan Avenue, a new road located near five Berdan family farms, was soon added and Victorian homes were built alongside it and in nearby areas. The grandest of the estates, perched atop a hill by Small Lots Road was David Acker's estate "Fairlawn," from which the township gets its name (Images of America, Page 7).

Rapid suburban development of the town was spurred by the need to house workers from the neighboring town of Paterson in the late 1800s, and small home construction continued through the 20th century, occurring in three sections: the River Road-Fair Lawn Avenue area known as "Memorial Park", the area at Lincoln Avenue and Wagaraw Road known as "Columbus Heights", and the area east of the railroad and south of Broadway, known as Warren Point. The development of this section was catalyzed by the "establishment of a post office, a railroad station, and a trolley to the Hudson River" (Images of America, Page 8).

Fair Lawn, recognized for its rich history today, is home to the following eight sites listed on the National Register of Historic Places:

Other sites, in addition to those listed above, are also considered historic by the Historic Sites Survey Committee of the Bergen County Historic Sites Advisory Board, including:

The hills of Wyckoff are visible from much of the northern portion of Fair Lawn.

Fair Lawn is an incorporated collection of diverse neighborhoods, each with its own distinct character and vibe. Unincorporated communities, localities and place names located partially or completely within the borough include:

There also exist more intricate micro-neighborhoods within macro-neighborhoods throughout the borough, such as "Fair Lawn Commons" (The Commons) off Route 208, located within the Radburn Historical District, yet which has a separate, more affluent feel and modern look and subculture; Radburn's El Dorado Village, which is known for its Eastern European immigrant residents; and just to its west, the "Chandler Houses". Fair Lawn's newest neighborhood is Fair Lawn Promenade (The Promenade), a highly engaged mixed-use development extending northward from The Commons along Highway 208 North, consisting of apartments, shops, offices, and restaurants, with the motto to be able to "live, shop, work, and play" in one locale.

These distinct communities are located throughout the borough, and each has its own flair, making Fair Lawn not just ethnically, racially, and religiously diverse, but also an experientially diverse borough notable even amidst Bergen County's diversity on a larger scale.

Fair Lawn has a longstanding tradition of ethnic diversity and a tolerance for people of different ethnicities and religious faiths. Continuing steady immigration from Eurasia, Asia, Europe, and Latin America has transformed Fair Lawn into an international melting pot, and over 50 languages and dialects are spoken in the borough.

Fair Lawn has been a noted center for Jewish culture over a period spanning several decades. Since the early 2000s, the Orthodox Jewish population has been increasing significantly and has replaced the earlier decreases in members of the non-Orthodox Jewish sects. After the collapse of the Soviet Union in 1991, Russian Jews began to migrate to Fair Lawn. Fair Lawn's Jewish American population has therefore maintained an at least one-third presence overall for several decades. Russian Jews were then followed by Russian Orthodox Christians. Over 10% of the borough's population is of Russian descent, the highest of any community in New Jersey, and increasing with continued migration of Russian Americans from Brooklyn. The size of Fair Lawn's Russian American presence prompted an April Fool's satire titled, "Putin Moves Against Fair Lawn". Fair Lawn also has the largest Israeli American community in Bergen County. On November 22, 2015, the Jewish Historical Society of North Jersey celebrated the grand opening of a permanent home at 17-10 River Road in Fair Lawn, after being housed at various locations, mostly in neighboring Paterson, for decades.

Fair Lawn has historically also had a large Italian American population, 19.7% in 2000, but this number is decreasing as the descendants of the original Italian immigrants are being displaced by immigrants from around the globe.

A magnet for immigrants

Fair Lawn's reputable school district, safe and well-policed neighborhoods, and the borough's convenient access to commercial centers and hospitals, a complex network of highways, transit lines, New York City, and Newark Liberty International Airport, have all made Fair Lawn a magnet for new immigrants from several regions around the world. The 2012 American Community Survey conducted by the Census Bureau showed a significant increase in the Asian American population, including the Asian Indian, Filipino American, Chinese American, Korean American, and Vietnamese American populations, and the Polish American population is also growing. The public library in Fair Lawn holds storytelling programs in Hindi and Hebrew languages, while Mandarin Chinese has been taught in the school district since the 2007-08 school year.

A number of places for congregation cater to different nationalities in Fair Lawn, including three Korean churches, one Taiwanese church, Young Israel of Fair Lawn, Saint Leon Armenian Church, and the (Italian American) Cosmos Club of Fair Lawn. Several Filipino organizations are based in Fair Lawn.

There were 11,806 households out of which 33.4% had children under the age of 18 living with them, 63.5% were married couples living together, 9.0% had a female householder with no husband present, and 24.6% were non-families. 21.3% of all households were made up of individuals and 12.3% had someone living alone who was 65 years of age or older. The average household size was 2.67 and the average family size was 3.12.

Dietch's Kiddie Zoo is a former children's zoo that opened in 1951. It also included kiddie rides and a train ride. The zoo closed in 1967. 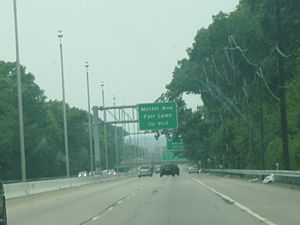 Broadway becomes Route 4 in Elmwood Park to the west and eventually Dr. Martin Luther King Boulevard in Paterson. To the East, it becomes Route 4 heading into Paramus and is less than 10 miles (16 km) from the George Washington Bridge.

Fair Lawn Avenue is considered the borough's main street, containing its Borough Hall, Police Station, and Public Library. The road goes west over the Passaic River into Paterson, and on the east, Fair Lawn Avenue ends at Saddle River Road, which through Dunkerhook Park becomes Dunkerhook Road, and becomes Century Road once in Paramus, at Paramus Road. The intersection of Fair Lawn Avenue and Plaza Road form what could be considered a "town center", with several shopping plazas and the Radburn train station all within walking distance. In October 2015, a community meeting was held to discuss a vision for this corridor. Other commercial areas include Broadway and River Road.

Route 208 has its southern terminus in Fair Lawn and bisects the borough from the northwest to the southeast, where it eventually merges with Broadway to become Route 4 just west of Fair Lawn's border with Paramus. Taken the other direction, Route 208 flows northwest to Interstate 287 in Oakland. Numerous commercial establishments and office buildings line Route 208 along the northwestern half of this limited access highway's trajectory through Fair Lawn.

On the opposite side of the Passaic River, Route 20 southbound leads to both Route 21 southbound and the Garden State Parkway southbound in Clifton, as well as Route 80 East and Westbound and Route 46 westbound, which is used by people in the river neighborhoods to access Downtown Paterson via Route 19 to avoid Broadway traffic.

The first numbers (before the dash) correspond to block-distances from Broadway (on streets that run North-South) and to the numbered streets in the borough (example: 2nd Street, 17th Street, etc.) on the streets that run East-West; with the highest numbers being in the low 40s, and the lowest numbers being 0-30, etc. Addresses south of Broadway / Route 4 start with a zero and a hyphen, which can cause confusion with those unfamiliar with the grid system. Most GPS systems and online address entry forms do not accept the dash, though addresses entered without the dash are typically handled properly. 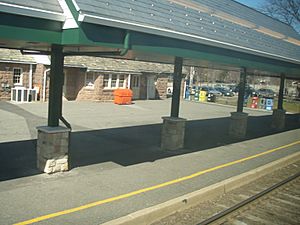 Fair Lawn is served by the Radburn and Broadway train stations on the NJ Transit Bergen County Line, which offers service to Lower Manhattan via the Hoboken Terminal, and connections at Secaucus Junction to Penn Station in Midtown Manhattan and to most other NJ Transit train lines.

Spanish Transportation and its jitney buses / guaguas operate out of its terminal located one block from the NJ Transit Paterson Terminal on Broadway in downtown Paterson. The two lines, the Broadway and Main Street jitneys, begin at its respective Main Terminal on Broadway, with the Broadway-Washington Heights line heading west on Broadway with frequent local stops then continuing onto Route 4 before crossing the George Washington Bridge and dropping commuters off in front of the George Washington Bridge Bus Terminal with access to the A Train. The Main Street-42nd Street route heads south down Main Street and makes frequent local stops through Clifton and Passaic, then makes sporadic non-local stops until undergoing the Lincoln Tunnel, dropping commuters off via 42nd Street in front of the Port Authority Bus Terminal.

A significant historic site in Fair Lawn is the Passaic River Fishing Weir, a prominent archaeological feature just north of the Fair Lawn Avenue Bridge. It was constructed by Lenape tribe members and is the best-preserved of several such weirs on the Passaic River.

Fair Lawn is home to the following locations on the National Register of Historic Places:

Fair Lawn also has a close association with two historic areas along the Saddle River in Paramus. One is the Easton Tower, a Bergen County historic site that consists of a stone tower and a small dam which mark the site of the colonial-era Jacob Zabriskie mill and the 19th-20th centuries-era Arcola community park. Another is the Dunkerhook community, focused around the New Jersey designated historic road, Dunkerhook Road. The western section of the community includes the Naugle House and the Jacob Vanderbeck Jr. House, and the eastern section included a slave and free-African American community that consisted of a school, a cemetery, a church, and houses including the now-demolished Zabriskie Tenant House.

All content from Kiddle encyclopedia articles (including the article images and facts) can be freely used under Attribution-ShareAlike license, unless stated otherwise. Cite this article:
Fair Lawn, New Jersey Facts for Kids. Kiddle Encyclopedia.