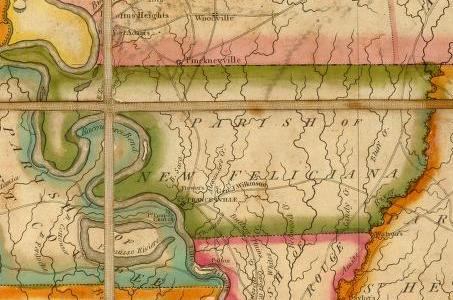 Parish of New Feliciana, outlined in dark green - circa 1816

Feliciana Parish, or New Feliciana, French: Paroisse de Félicianne, was a parish of the Territory of Orleans and the state of Louisiana, formed in 1810 from West Florida territory. Given an increase in population, it was divided in 1824 into East Feliciana Parish and West Feliciana Parish.

Feliciana is a Spanish word meaning "happy land". Formerly part of the French La Louisiane, the area was settled largely by French colonists by about 1775, when it came under Spanish control during the American Revolutionary War. It was named by Spanish Governor Galvez. In 1777 he married a widow named Marie Félicité St. Maxent and honored her in the name.

The town of Jackson was founded in 1815 as the seat of justice for Feliciana Parish, before the parish was divided into two jurisdictions. The town also served as a land office and as a center for learning and culture. Legend holds that the town was originally called Bear Corners for the many wild black bears crossing nearby Thompson's Creek. It was named by Anglo-American settlers after General Andrew Jackson, who reportedly camped there with his troops on the return trip from the Battle of New Orleans during the War of 1812.

Aboriginal residents here were Tunica Indians who had previously usurped the native Houma people. Later, the Spanish appeared, laying claim to the territory by right of exploration, until 1699. The French were not far behind, for LaSalle, having explored the Mississippi River in 1682, claimed all the lands drained by it in the name of Louis XIV.

In 1763, at the French and Indian War's end, Spain ceded Florida to Great Britain, and France ceded Louisiana and the Isle of Orleans to Spain. The area that is now East and West Feliciana was claimed by Britain as part of its West Florida colony. Encouraged by land grants, emigrants, mainly from the English colonies, or from Great Britain, poured into West Florida to populate the frontier. By 1775, many Loyalists had migrated here, establishing large, prosperous plantations.

Bernardo de Gálvez, Louisiana's colonial governor, recruited troops for surprise attacks on Fort Bute and Baton Rouge, both of which soon capitulated. Galvez also captured Natchez, Mobile, and Pensacola; and at the end of the American Revolutionary War, Spain regained both the West and East Florida colonies. Thus, the part of today's Louisiana which is east of the Mississippi River and north of Lake Pontchartrain fell under Spanish control, from about 1780 until 1810.

In 1800, Spain was compelled to cede Louisiana back to France and, in 1803, Napoleon sold Louisiana to the United States. The West Florida section of what is now the state of Louisiana, however, was not included; the Louisiana Purchase was vague as to defining its eastern boundary. Though President Jefferson insisted that this area was American, the Spanish denied this and continued their occupation. (The eastern boundary of West Florida, since the 1760s, had been the Apalachicola River, and Pensacola was the capital.)

Feliciana colonists, unhappy under the Spanish regime, revolted in 1810 and established the short-lived Republic of West Florida. They petitioned President James Madison to annex the area. Their request was honored when, in October 1810, the Florida Parishes area was declared to be part of the Louisiana Purchase and an American possession.

The United States initially established "Feliciana County" as part of the Territory of Orleans, later subdividing it to form four parishes...New Feliciana, East Baton Rouge, St. Helena, and St. Tammany. In 1812, Louisiana was admitted to the Union, with Feliciana Parish included.

Addressing complaints that citizens of western Feliciana Parish found it difficult to travel during bad weather to the parish seat, Jackson, in the eastern section, in 1824 the state divided the area into two parishes...East and West Feliciana. At that point, two new parish seats were selected, Clinton in East Feliciana and St. Francisville in West Feliciana.

All content from Kiddle encyclopedia articles (including the article images and facts) can be freely used under Attribution-ShareAlike license, unless stated otherwise. Cite this article:
Feliciana Parish, Louisiana Facts for Kids. Kiddle Encyclopedia.