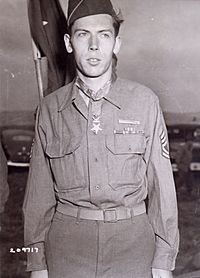 Francis Sherman "Frank" Currey (June 29, 1925 – October 8, 2019) was a former United States Army soldier. He was a recipient of the Medal of Honor for his actions in World War II.

Currey was born in Loch Sheldrake, New York. He was an orphan and grew up in foster care. He enlisted in the Army one week after he graduated high school. He was sent to and completed Officer Candidate School but was refused a commission for being too young. He completed his training with 75th Infantry Division. In the Spring of 1944 he was sent to England. But, due to a recent order by President Roosevelt, he was not allowed into combat until he was 19. After his birthday in June, he was sent to Normandy but didn't arrive until weeks after D-Day. He was sent to the 120th Infantry Regiment in the Netherlands. This was in September 1944. 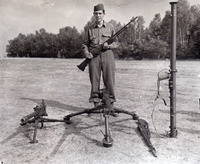 T/Sgt Francis S. Currey used these weapons while halting a German attack on his company during the Battle of the Bulge.

During the Battle of the Bulge Currey was in the town of Malmedy, Belgium. On December 21 the strongpoint he was defending was overrun by German Tanks and infantry. Currey and 5 other American soldiers withdrew to an old factory under intense enemy fire. Currey found a Bazooka and ammunition nearby. He fired the bazooka at the closest tank disabling it. Moving forward he then killed three enemy soldiers in the doorway of a house with his BAR. He fired the bazooka at the same house which caused the remaining Germans to run. He saw five more Americans under fire from three German Tanks. With Anti-Tank grenades he caused the Germans to abandon the tanks so the Americans could escape. He then covered their by firing an abandoned heavy machine gun at the Germans. He kept the Germans at bay for twelve hours. After nightfall Currey and his companions managed to find a jeep and return to their own lines. Sergeant Currie was credited with saving five fellow Americans, two of them wounded. He also stopped an attack by Germans that threatened to flank (attack from the side) his division.

In addition to being awarded the Medal of Honor, Francis Currey also received the Silver Star, Bronze Star Medal and Purple Heart. Belgium awarded him their nation's highest honor,the Order of Leopold. He was inducted into the New York State Senate Veterans' Hall of Fame in 2006.

After the Army, Currey returned to New York. He worked at the VA Hospital in Albany, New York. He held several positions with the hospital and retired as a in 1980. He started a landscaping business in his retirement. He moved to South Carolina where he lived for about 20 years, then he returned to Selkirk, New York. Since 2004 his hometown of Hurleyville, New York has held an annual Francis S. Currey day in his honor. in 2009 Governor David Paterson of New York proclaimed July 12, 2009 as Sgt. Francis S. Currey day in the state of New York.

All content from Kiddle encyclopedia articles (including the article images and facts) can be freely used under Attribution-ShareAlike license, unless stated otherwise. Cite this article:
Francis S. Currey Facts for Kids. Kiddle Encyclopedia.