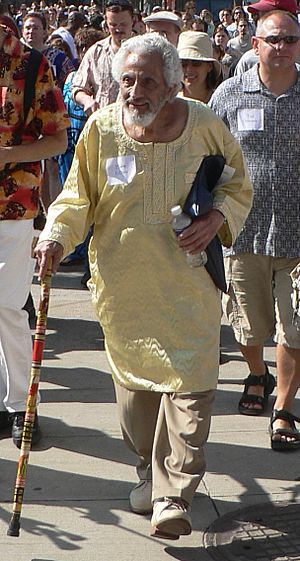 Halim El-Dabh at a Cleveland festival in 2009.

Halim Abdul Messieh El-Dabh (March 4, 1921 – September 2, 2017) was an Egyptian-born American composer, performer, ethnomusicologist, and educator. He has a career spanning six decades. He is known as an early pioneer of electronic music, for having composed in 1944 the first piece of electronic tape music.

All content from Kiddle encyclopedia articles (including the article images and facts) can be freely used under Attribution-ShareAlike license, unless stated otherwise. Cite this article:
Halim El-Dabh Facts for Kids. Kiddle Encyclopedia.